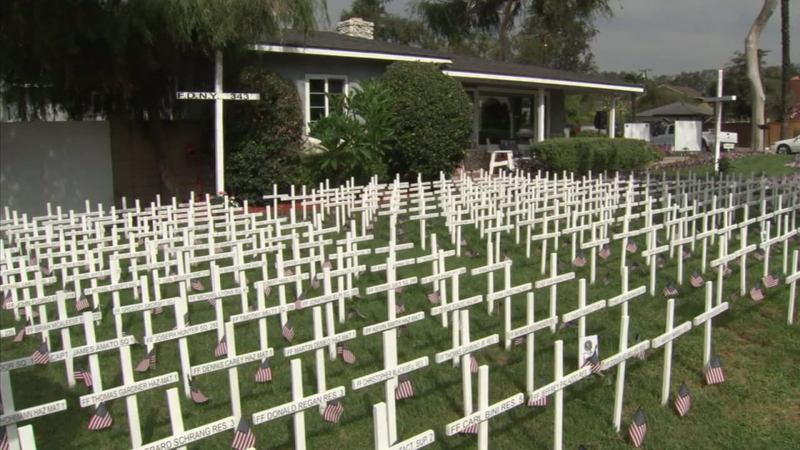 OCFA firefighter honors 9/11 victims with memorial on his lawn

"It's such an honor to have her flag here," Anderson said.

The 72-year-old retiree was returning to California on Sept. 11, 2001. She died on Flight 11 and is among the thousands of victims named and displayed in Scott Townley's tribute to them.

Every anniversary, Townley turns his front yard in Fullerton into a memorial. It started with a sign and some flags, just days after the attacks. Seventeen years later, it's grown to include thousands of flags and wooden crosses.

Each one was made by Townley and represents a life lost.

"It's my personal tribute to what happened on 9/11," he said. "I get emotional. It was hard to build the crosses because it was every firefighter."

In an octagon, Townley displayed the faces of the tragedy - all 3,300 of them. He said it took more than three years of trips to New York to research and locate copies of photos.

He said pixilated photos were left at Ground Zero by people searching for their loved ones.

"Sitting here one night, I was putting the lights up and I was like oh my God, all these people are gone," he said as his voice broke with emotion.

His memorial has also added names of victims who have died since 9/11.

Townley encourages people to stop by and take it all in. He hopes that we never forget.