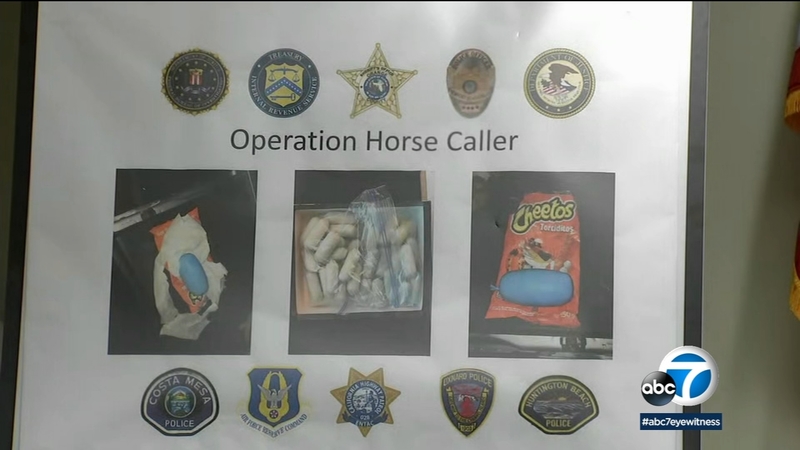 The suspects arrested are among 19 people charged in "Operation Horse Caller." The other seven defendants charged in the federal grand jury indictment are fugitives, with four believed to be in Mexico, officials said.

Authorities said buyers of the drug would use coded language referencing Mexican food when placing orders with the call center.

"For example, a taco or an enchilada would be used for the type of order. The call takers would then send a 'runner' to a parking lot in Orange County to deliver the heroin to the caller in exchange for cash," said Kristi Johnson, FBI assistant director in charge.

The conspiracy allegedly involved couriers to sneak the drug from Mexico to Orange County.

More than 16 tons of marijuana with a street value of nearly $1.2 billion was seized in the Antelope Valley, making it the largest eradication effort of illegal grow operations in the history of the Los Angeles County Sheriff's Department.

Federal officials seized four homes and several bank accounts they say were used to launder the money in the heroin operation.

The defendants in custody pleaded not guilty at arraignment and were scheduled for trial Sept. 7.

Julio Cesar Martinez of Riverside, 43, and his brother Victor Martinez of Hemet, 44, are the alleged owners and operators of a heroin distribution organization in Orange County that continued through April, according to the federal indictment returned May 26. Authorities said the suspects began operating the heroin ring in March 2017.

Two of the defendants - Maricela Guerrero of Santa Ana, 53, and Marla Portillo Cordova of Santa Ana, 34 - worked in a call center taking orders for heroin from dealers, prosecutors alleged.

Several other defendants were involved in delivering the narcotic to buyers and collecting money in exchange for a cut of the profits or heroin, the indictment alleged.