For more than 24 hours straight, negotiators have been at the bargaining table trying to prevent a strike by grocery workers.
KABC
By Jessica De Nova and Sid Garcia 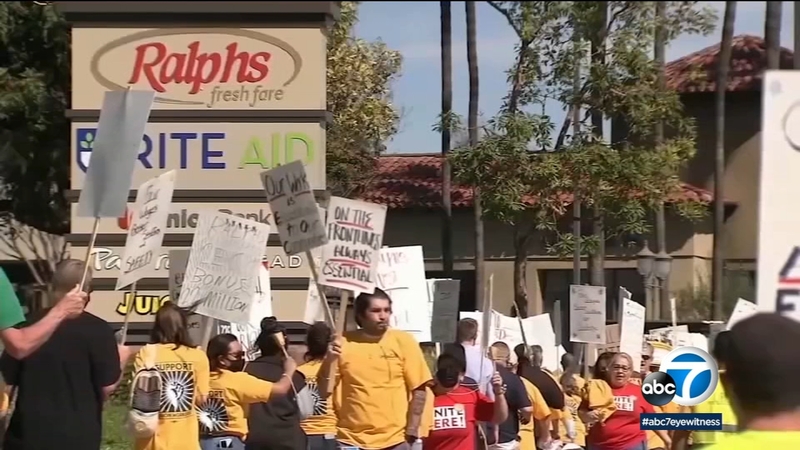 SANTA ANA, Calif. (KABC) -- A rally planned in Orange County Monday by grocery store workers did not come to fruition as contract negotiations continue in hopes of avoiding a strike against several major supermarket chains.

For more than 24 hours straight, negotiators have been at the bargaining table trying to prevent a strike by grocery workers.

"I don't think the companies want to see us go out on strike, but they've gotta do the right thing by the workers in this contract," said Andrea Zinder, UFCW Local 324 president. "It's our turn."

They haven't reached an agreement yet, but both sides want to keep the momentum going.

Workers, along with several city and county leaders, were set to meet at the Vons grocery store on Bristol Street and MacArthur Boulevard at 4 p.m., but the rally was postponed as negotiations continue.

About 47,000 workers at hundreds of Ralphs, Albertsons, Vons and Pavilions voted to authorize their union to call a strike last month, though no strike date has been set.

Negotiations, which have been going on since January, resumes Monday after a weekend of contract discussions with no progress, according to the United Food and Commercial Workers International Union.

The union has been emphasizing the essential role grocery workers played during the pandemic.

"Nobody wants to see a strike, but the thing is, we have to be prepared," said Marco Escalante, a Vons employee. "I can't speak for them. I'm sure they're being prepared and believe me, we're ready to go."

Negotiations, which have been going on since January, are set to resume Monday after a weekend of contract discussions with no progress, according to the union.

The union, who's calling for a "fair" contract, said the terms of workers' current contracts remain in place. They said the company's current wage proposal would add a 60 cent increase per year for three years.

"Compared to both companies' pandemic profits, this falls shockingly low, well below workers' cost-of-living needs, and does not represent the sacrifices workers made over the past two years helping their employers remain successful and highly profitable," read a statement issued by a union.

"Because the stores lately have been low-staffed, and it puts an additional burden on all of our members, and an even greater burden on the customers," Zinder said.

In a statement to Eyewitness News, a Ralphs spokesperson said:

"At Ralphs, we want what is right for our associates, more money in their paychecks, continuing to provide industry-leading healthcare benefits and balancing that investment with keeping groceries affordable."

On Saturday, Ralphs owned by Kroger, issued a statement saying certain benefits - such as healthcare coverage and pension for retirement - "could be at risk" should the union call for a strike.

"During the previous three-year contract, UFCW locals collected $23 million in membership dues from Ralphs associates, yet if their members choose to walkout, strike pay from the union would be $15 per hour - less than what the company currently offers to any worker in California," read the statement.

"Any activity by the union in the coming days, besides negotiating an offer that puts more money in our associates' pockets is nothing but mere propaganda by UFCW," said Robbie Branton, vice president of Operations at Ralphs. "The UFCW needs to do the job that their members pay them for - negotiating a fair contract that keeps them working."

Employees of Ralphs, Vons, Pavilions and Albertsons in 2019 voted to authorize a strike, but contracts ultimately were reached without a walkout.