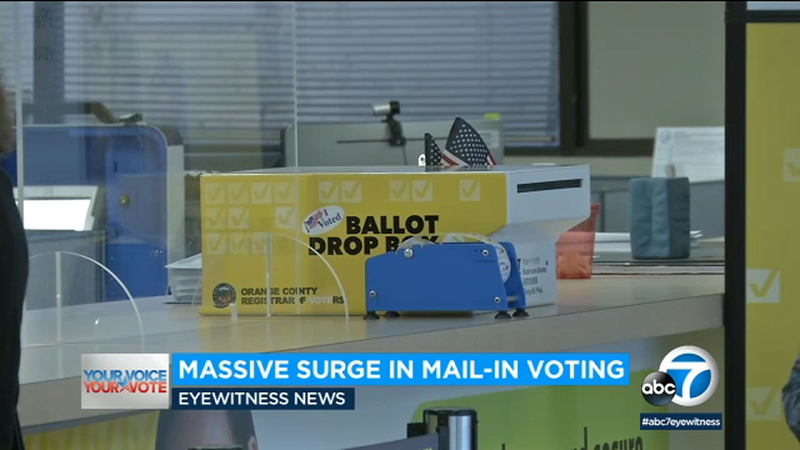 SANTA ANA, Calif. (KABC) -- The United States Election Project says at least 11.6 million Americans have already returned their ballots, compared to just 1.4 million around this time back in 2016. The historic numbers are also evident in Orange County.

"This is my fifth presidential election managing this process and I've never seen it like this, ever," said Orange County Registrar of Voters Neal Kelley, who is amazed by this year's historic ballot returns - up almost 500% compared to where the county was in the last presidential election.

"It's a flood, it's a flood and I look back at the data from 2016, we're 80,000 ballots ahead of where we were at the same time period, so voters are obviously energized and engaged, and I mean, we just mailed these ballots out a few days ago," said Kelley.

While a steady flow of people vote in-person at the Registrar of Voters Office, massive amounts of people are voting by mail this year. Of the more than 105,000 ballots turned in, 80,000 were by mail, and 20,000 through the official drop boxes.

Voting by mail? Here's how to make sure your mail-in ballot is counted
EMBED More News Videos

Want your mail-in ballot to be counted? Send your ballot as soon as you can, sign it and make sure your signature matches the one on file.

"I think it's possible if they're energized and they thought as soon as I get it, because of the pandemic, I'm gonna return it. And voting at home is the safe way to go, and I've been promoting that for quite a while," Kelley said.

When you break it down by party, 7.6% of Democrats, 4.7% of Republicans and 4.7% of those with no party preference have already voted.

"I would anticipate that that's just going to continue to climb. I'm excited about it, but at the same time I'm a little surprised," said Kelley.

The explosive numbers are also encouraging to voters we spoke with, who think it's just another sign of the times.

"I am very impressed, and I'm very glad and happy about it and full of hope," said Orange resident Malgolzata Zabaglo.

"I don't think it's ever going back to the way it was, but we will adapt because that's who we are," said Orange resident Al Truehart.