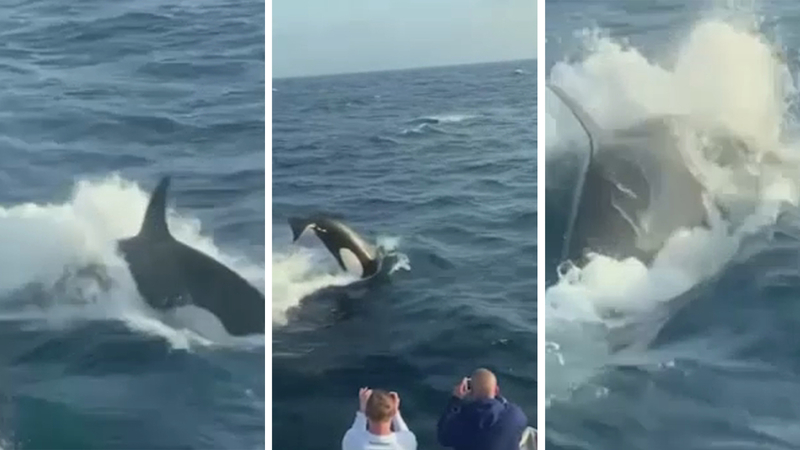 GALVESTON, Texas -- A fishing trip turned into quite the nature show as rare orca whales appeared in the Gulf.

Galveston Party Boats, Inc. shared quite the video of the orcas leaping into the air before splashing back down into the water about 130 miles off the Galveston coast.

In a Facebook post, Galveston Party Boats representatives said an excursion had set out for a 30-hour Spring Break fishing trip with customers on March 15 on their New Buccaneer vessel with Captain Matt Smith, who recorded the video.

While out on the water, they had quite the haul of 40 yellowfin tuna, 14 blackfin tuna, 281 vermilion snapper and more.

But it was the orcas that appear to have captured the most attention in a video that has been viewed more than 411,000 times and counting since it was posted on March 17.

You can see customers aboard the New Buccaneer eagerly watching with their phones out.

Smith replied to someone in the Facebook comments that this was the first sighting he'd seen so close to home.

According to a 2014 blog from the National Wildlife Federation, about 500 orcas live in the Gulf of Mexico.

The orca whale is one of the top marine predators and is one of the most recognizable marine mammals because of their distinct black and white bodies.


They also exist in a wide range of habitats, both open seas and coastal waters, NOAA says.

They are most abundant in colder waters like Antarctica, Norway and Alaska but can be found in tropical and subtropical waters, like the Gulf.

The most well-studied orca whale populations occur in the eastern North Pacific Ocean, and resident orcas have been seen from California to Russia.

All orca whales are also protected under the Marine Mammal Protection Act, which prohibits the "taking" of any marine mammal species in U.S. waters.

"Take" means to hunt, harass, capture or kill any marine mammal or attempt to do so. The act also prohibits the import and export of marine mammals and their parts or products.