Oscar-winning actress Marlee Matlin continues to be champion for deaf, blind community in 'Feeling Through' 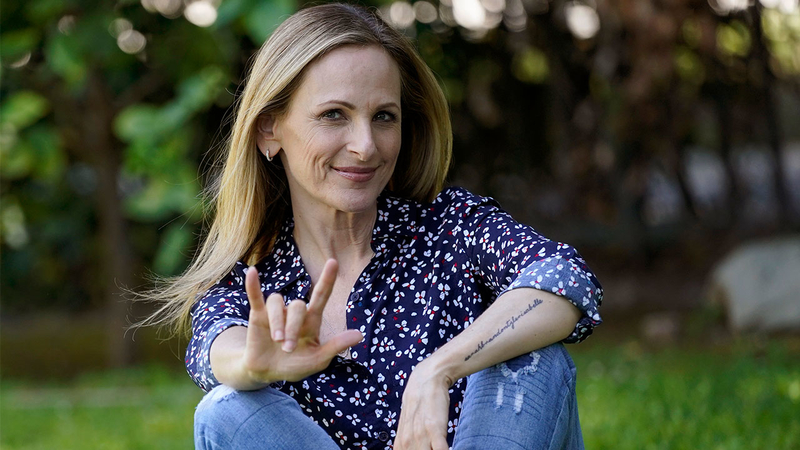 Marlee Matlin continues to be a champion for disabled actors

LOS ANGELES -- In 1987, she won the Best Actress Oscar for her film debut; 34 years later, Marlee Matlin is heading back to the Oscars, this time as an executive producer.

It's for a live action short called "Feeling Through." More than anything, Matlin hopes what this movie has achieved will have a lasting impact on the show biz community.

"Feeling Through" tells the story of a young man who gives up on finding a place to sleep for the night when he meets a deaf and blind man who needs help getting home. The experience will forever change this young man. The film's director, Doug Roland, based this on a story from his own life. He worked with the Helen Keller National Center to make this movie happen. It's there he discovered Robert Tarango, a deaf and blind man who was part of the center's staff. He hired him to be his leading man.

Matlin and her longtime interpreter and friend, Jack Jason, came on later as executive producers.

"You don't see these kinds of projects very often and we have produced a couple projects in the past but this one is so unique and I knew it was time for Marlee to get back into the Oscar game," said Jason.

"It moved me and that's why I'm on board and supporting this Oscar campaign because it's all about humanity," said Matlin. "And having the first deaf blind actor be in a film, I mean, it's just a bonus and I hope Hollywood sees that and I hope that Hollywood knows that casting like this is important."

Matlin says that more than ever, it's a time to collaborate and communicate.

"Now is the time to not be afraid to ask questions, to learn, to make movies, to tell stories because if you want the best story, then do it authentically," said Matlin.

That's how it was done when Matlin was cast to play a deaf woman in the film version of "Children of a Lesser God." The performance won her an Oscar. But this beautiful time in her career began in a dark place.

"When I won the Golden Globe for Best Actress, I immediately went to rehab the next day and got help with my drug addiction. And during that time at the Betty Ford Center, I got nominated for an Academy Award," said Matlin. "And I've been sober for 34 years ever since."

We'll see Matlin on Oscar Sunday, April 25, where she will also be presenting an award.

Mark your calendars: April 25 is Oscar Sunday. Live coverage begins Sunday morning and continues all day with special "On The Red Carpet" coverage leading up to the 93rd Academy Awards ceremony. After the last award is handed out, stay with "On The Red Carpet" for continuing coverage. Be sure to follow @OnTheRedCarpet on Facebook, Twitter, Instagram and TikTok for all your Oscar news and information.
Report a correction or typo
Related topics:
arts & entertainmentoscarsacademy awardsmoviedeafblindotrc
Copyright © 2022 OnTheRedCarpet.com. All Rights Reserved.
OSCARS
Denzel Washington poised for Oscar nod in 'The Tragedy of Macbeth'
Oscar buzz about Kirsten Dunst in 'The Power of the Dog'
Troy Kotsur is first deaf actor with individual SAG nomination
Oscars will have a host this year
TOP STORIES
LA County appears to have passed peak of omicron surge, officials say
LA County appears to have passed peak of omicron surge, officials say
Woman who molested 10-year-old as teen sentenced to juvenile facility
Diego Verdaguer, Argentine singer-songwriter, dies of COVID at 70
10 injured when bridge collapses in PA; human chain formed to help
Full closure of WB 91 Freeway in Corona rescheduled for this weekend
Child vaccine rates alarmingly low as doctors contend with COVID surge
Show More
Assistant fire chief arrested for allegedly impersonating officer
Police capture murder suspect after large-scale search in NoHo
Reparations are for descendants of Black slaves: California official
Rapper Drakeo the Ruler's family announces wrongful death lawsuit
Rams host NFC Championship ahead of Super Bowl
More TOP STORIES News