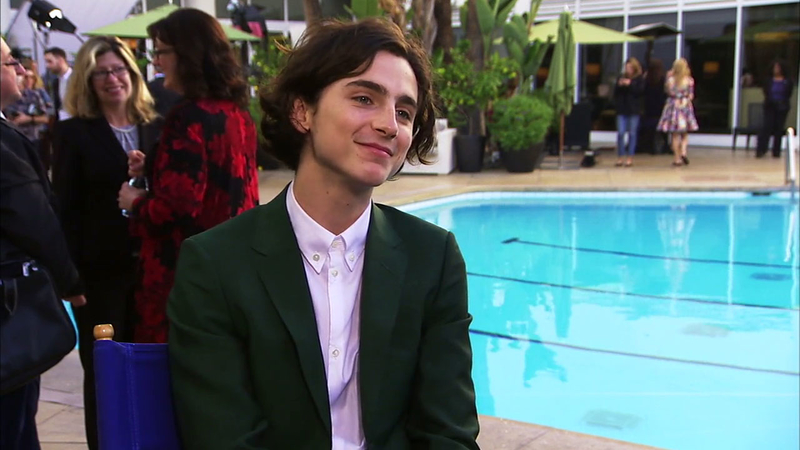 LOS ANGELES -- "Call Me by your Name" star Timothee Chalamet is quickly making his mark in Hollywood.

The 22 year old is Oscar's youngest Best Actor nominee in almost 80 years. But the idea of stardom is not going to his head. He readily admits to being a bit "starstruck" at the recent Oscar nominees luncheon - even straining his neck a bit to see Meryl Streep.

"I know. I'm not embarrassed by that," said Chalamet. "It's not like my fifth year. I'm the new guy! I really am a fan first and foremost. That's not a rare symptom of being a young person at these things. I've seen it at other events where the young people are going around."

It's been quite a year for Chalamet. Along with "Call Me by your Name," he co-starred in "Lady Bird," which is also up for Oscar's Best Picture.

With the success he's had, making acting a career was a no-brainer.

"Any career in the arts is a scary thing to get into, I think. From a parent's perspective the issue of economic stability is ridden with anxiety," said Chalamet. "I don't know, man, you gotta pursue it, you gotta go for it."

"Call Me by your Name" explores sexuality, and a teenager who's coming of age, enamored by an older man. Chalamet thinks the idea of "love" is what's drawn so many people to the movie.

"Because love is love is love. And it's a universal love story. And we've all had that experience - maybe not to the ferocity of in the movie but when we fall for someone for the first time and we're clueless," said Chalamet. "And we can all relate to the monologue at the end of the film that says to suffer is to suffer. And there's no wrong way to suffer. The only thing wrong with suffering is to beat yourself up on top of that."