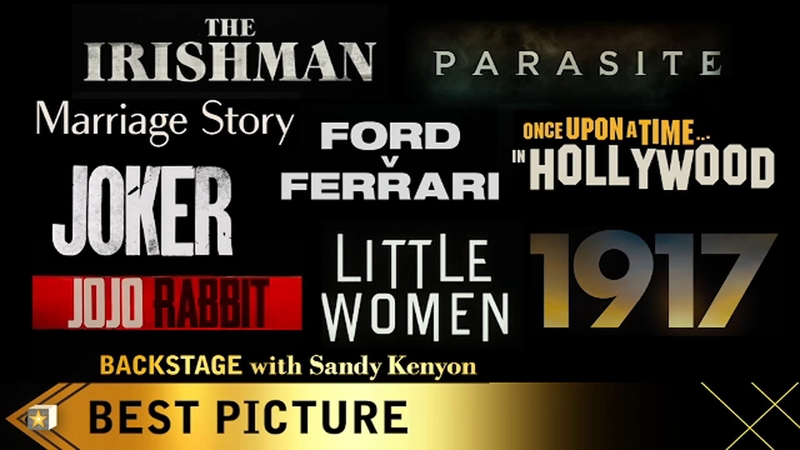 NEW YORK -- Nine films are nominated for Best Picture, including one movie that could become the first non-English language film to win Oscars' top honor.

That movie is "Parasite" about a family of con artists in Korea. It's a movie that ranges from comedy to drama over the course of its running time.

Director Bong Joon Ho's universally beloved "Parasite" could pull off an upset that would rank alongside the underdog win of "Moonlight" three years ago.

My favorite film of 2019 was "1917." Filmed, in what appears to be one continuous take, the movie set during World War I brings home its horror in a thrilling way: an action movie that makes you think long and hard about the futility of war.

Sam Mendes' World War I film was the top-prize winner of the Producers Guild, the Directors Guild and the BAFTAs. "1917" is the clear favorite

"Ford v. Ferrari" ranks as one of the very few movies ever to capture the excitement of auto racing: to explain why it gets my pulse racing and heart soaring.

Saoirse Ronan leads a strong cast in "Little Women" directed by Greta Gerwig. She adapted a timeless story of four sisters. Her movie feels like a contemporary story instead of the umpteenth version of a tale from the 19th century.

Loyalty is at the heart of "The Irishman," an epic about the Mafia at the height of organized crime's power in the mid 20th century. Robert De Niro does his best acting in a decade as a hired gun known as, The Irishman, who worked for Teamsters boss Jimmy Hoffa, played by Al Pacino in the first movie he has ever made with director Martin Scorsese.

"The big thing is he takes care of you," Pacino told me at the film's premiere on the opening night of The New York Film Festival. "He's got you covered."

"Marriage Story" earned half a dozen Golden Globe nominations: more than any other movie including nods for best drama and one each for Scarlett Johannson and Adam Driver playing a couple facing a divorce.

The other nominees are listed below.

RELATED: Backstage with Sandy Kenyon: The year in entertainment