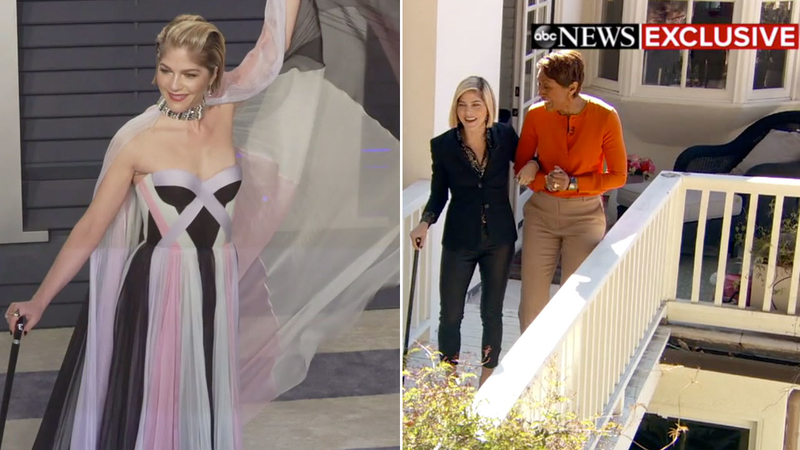 After an inspiring appearance at the Vanity Fair Oscars after-party, Selma Blair is using the spotlight to bring attention to life with multiple sclerosis.


"I'm doing very well," she told Good Morning America's Robin Roberts through her difficulty speaking. "I'm very happy to see you just put out what being in the middle of an aggressive form of multiple sclerosis is like."

The actress, whose career spans more than two decades and includes films like Cruel Intentions and Legally Blonde, first opened up about her diagnosis last October.

Speaking to GMA in an interview that aired Tuesday, Blair explained that her speech was different because of spasmodic dysphonia, a neurological condition. She said she believed it was important to speak out when she was in the middle of a flare-up.

"I was a little scared of talking, and even my neurologist said, 'No, this will bring a lot of awareness. Because no one has the energy to talk when they're in a flare-up,'" she said, adding with a laugh, "But I do. Because I love a camera."

MS is an unpredictable disease of the central nervous system, according to the National Institue of Neurological Disorders and Stroke. It affects vision, balance and muscle control. It looks different in each patient and at each point in time, and it can range from mild symptoms to a loss of ability to write, speak, or walk.

For Blair, she struggled before her diagnosis. She said she reached out to actor Michael J. Fox for advice, thinking she might also have Parkinson's.

"I said, 'I don't know who to tell, but I am dropping things. I'm doing strange things,'" Blair recalled. "He got in touch with me and we began conversations. He really helped me ... he gives me hope."

She said some days she would not even be able to drop her son off at school a mile away without needing a nap on the way back.

"Ever since my son was born, I was in an MS flare-up and didn't know, and I was giving it everything to seem normal," she said. "And I was self-medicating when he wasn't with me. I was drinking. I was in pain. I wasn't always drinking, but there were times when I couldn't take it."

Blair said doctors wouldn't take her seriously, blaming her symptoms on her being an exhausted single mother. When she was diagnosed, she said she cried tears of relief.

"I had tears. They weren't tears of panic," she said. "They were tears of knowing I now had to give in to a body that had loss of control, and there was some relief in that."

Blair said she tries not to be too hard on herself as a working mother struggling with MS, especially on difficult days.

She had to explain her diagnosis to her son, now 7, who feared the diagnosis meant she might die.

She said she'd love to come back to GMA again in a year to see if she's better.