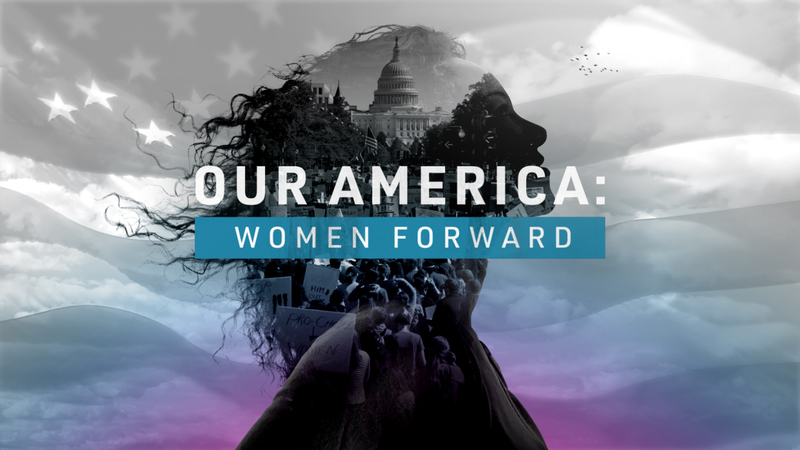 Watch the documentary on your local ABC station, wherever you stream: Fire TV, Android TV, Apple TV and Roku.

Watch Our America: Women Forward and see how these extraordinary women using their talents to move women and girls forward to build a better world and future.

Jennifer King is the first Black woman to be a full-time NFL coach, serving as the assistant running backs coach for the Washington Football Team. Her journey from a small town in North Carolina to the NFL was filled with years of hard work, perseverance, and playing and coaching basketball and football. As one of eight women currently coaching in the NFL, she is now the representation she never saw growing up as a football fan and athlete.

Kendall Coyne Schofield is the first woman to coach for the Chicago Blackhawks and the captain of the U.S. Women's National Team. The Gold Medal Olympian now works as a Blackhawks player development coach and leads her all-girls youth program, the Golden Coynes, to train and inspire the next generation. The sports broadcaster, coach and athlete hopes to ignite change to create a professional women's hockey league.

Pooja Jesrani, a Houston-area native, recently became NASA's first South Asian female flight director. In May 2020, when an American rocket took off from American soil for America's return to spaceflight, Jesrani was one of the women responsible for making it all look easy. As NASA forges ahead with the Artemis program, with the goal of landing the first woman on the moon and Mars, women like Jesrani will be at the helm directing the mission.

Nicole Mann is a NASA astronaut who is training as part of the Artemis project. She is also a Lieutenant Colonel in the U.S. Marines and a fighter pilot who deployed in combat missions in Iraq and Afghanistan.

From game changers to everyday heroes, women share compelling stories of triumph over challenges, including the devastating impact of COVID-19.

The Voice: A Future Leader Inspiring The Next Generation

Bushra Amiwala became the youngest Muslim to hold public office in the country when she was elected to be a Skokie school district school board member.

The Power Players: Shattering Stereotypes To Show 'We Can Do It'

Patrice Banks is an engineer turned mechanic who in 2016 founded the Girls Auto Clinic, a Pennsylvania-based repair center staffed by and focusing on women. As part of her #SheCANic movement, Banks teaches women about car mechanics so they can more confidently and comfortably navigate car repairs.

Kimberly Bryant is an engineer and founder of Black Girls Code who is helping Black girls program their own future. She is motivating these girls to see themselves as creators, engineers and future tech bosses.

Yanghee Paik, co-founder and CEO of Rael, and Chelsea Von Chaz, founder of Happy Period, are coming together to bring not just essential hygiene supplies but dignity to girls and women dealing with period poverty.

The Motivator: Helping Girls Of Color Pursue Their Dreams

Aisha Money is an educational specialist who advocates for and teaches marginalized students who are pushed out traditional schools, so they don't fall into the school to prison pipeline. She is helping reshape the harmful narrative that robs Black girls of their childhood and motivating them to believe in themselves.

The Everyday Heroes: Holding It All Together Day After Day

The Super Mom: Arlanda Miles is a school bus driver and mother of seven, who, despite the stresses of the pandemic, is doing her best to make it work every day. While dealing with financial uncertainty, Miles is overseeing the distance learning for her special needs son and his siblings.

The Faithful: Margie Winters and Andrea Vettori are a married Philadelphia couple who are finding their voices and a renewed purpose after being silenced for being their true selves. The women are embraced their faith to give back to the community and teach young people.

The Nurturer: Marta Lilian Gonzalez is an immigrant and mother of five who is working to provide her kids a better future. She learned English, became a cosmetology instructor, and supported her kids' dreams, which led to her son getting the role of Miguel in Pixar's Coco. Though she lost her job when the COVID pandemic hit, she is helping her daughter Lilian follow her dreams of attending USC grad school.