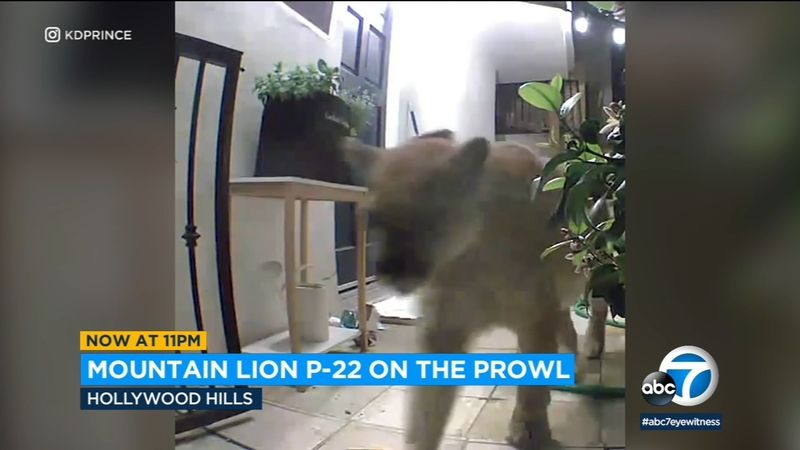 HOLLYWOOD HILLS, LOS ANGELES (KABC) -- Los Angeles' most famous mountain lion, known as P-22, appears to be making himself at home in a Hollywood Hills neighborhood.

Kevin Prince says he recently spotted the big cat roaming near his home - the fourth time in just over a year. The mountain lion was captured on video walking right past Prince's front door in the Hollywood Hills.

"I'm from New York. I am used to pizza rat. I am not used to lions at my front door," Prince said. "I'm from the concrete jungle, moving to the literal jungle. This place is crazy."

Prince said he set up a camera to be able to prove the mountain lion was indeed P-22.

Out and about: Mountain lion P-22 spotted roaming around in Silver Lake
EMBED More News Videos

Hollywood's most famous mountain lion, known as P-22, is now widening his roaming range after he was spotted in Silver Lake.

About a month ago, the so-called "Brad Pit of mountain lions" was spotted in Silver Lake, which is the furthest from Griffith Park he's gone since being tracked by the National Park Service.

It's been 10 years since he was first caught on an automated camera at night with the Hollywood sign illuminated behind him. The photograph went viral and catapulted the big cat to worldwide fame.