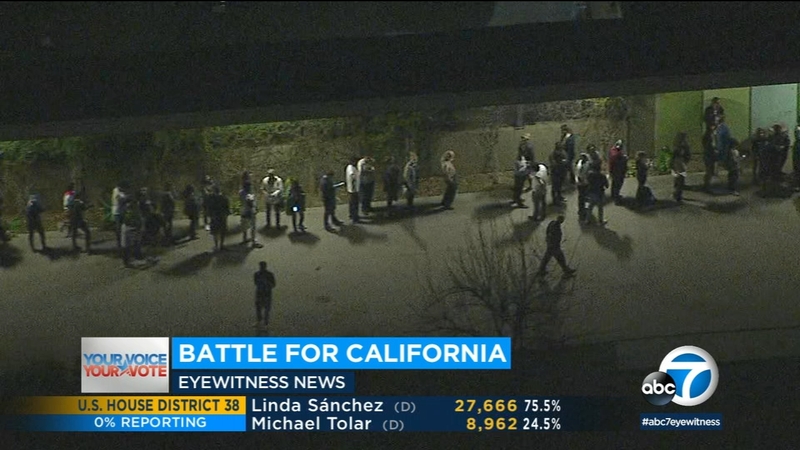 LOS ANGELES (KABC) -- Super Tuesday voters were waiting in long lines for hours before casting their ballot at some voting centers in Los Angeles County.

One voter reported waiting for three hours at the Echo Park Recreation Center, which was said to be equipped with only four voting machines. A lengthy, meandering line was seen on the sidewalk outside.

By the time polls closed at 8 p.m., there were still hundreds of voters in lines at a few Los Angeles County polling places. County officials said those already in line when the polls closed would still be allowed to cast their votes, as required by state law. Some estimates were that the lines would last past 10 p.m.

"My commitment is we will serve you tonight and make sure you have the opportunity to cast your ballot and that ballot will be included in the final returns for this election," Logan said.

Logan said his team had examined the issue earlier in the day and determined that the best action was just to let people already in line to vote, but not let additional voters show up after 8 p.m.

The delays appeared to be linked to a new electronic voting system the county started using this year. The system was open for early voting for 10 days before the election, but ultimately there were fewer polling places open than in the post. But another change this year was that voters were not restricted to only casting their vote in their own polling place.

Some polling places reported machines down or glitches in the check-in process.

At a voting center in Palisades Recreation Center in Pacific Palisades, some voters said their wait was about an hour. Some 85 people were in line at one point.
EMBED More News Videos

Super Tuesday voters were waiting in long lines for hours before casting their ballot at some voting centers in Los Angeles County.

Some voters at the Palisades Recreation Center acknowledged that voting was easier once they reached the front of the line.

That was not necessarily the case at Echo Park's Logan Street Elementary School, where six of the vote center's 15 voting machines were not functional. That circumstance contributed to a wait time of up to two hours for some voters.

A technician responded to the site and attempted to repair the broken machines, to no avail.

The wait at Echo Park Recreation Center was THREE HOURS for one voter. I’m told there are only 4 voting machines at this voting center.