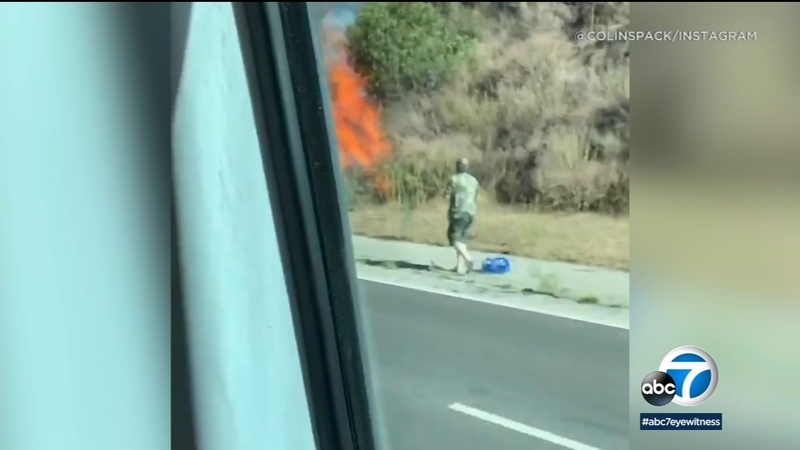 PACIFIC PALISADES, LOS ANGELES (KABC) -- New video shows the start of the Palisades Fire along a roadway and a man in the vicinity before it exploded to nearly 40 acres and threatened hillside homes.

The video shows a small fire burning on a hillside along Palisades Drive. It also shows a person standing nearby along the side of the road and walking toward the flames. It's not clear what connection if any the individual had to the fire.

The person who posted the video to Instagram on Monday said he alerted 911 about the fire and was told someone else had already reported it.

Los Angeles Fire Department officials are investigating the cause of the Palisades Fire.

They say it started Monday morning at the base of Palisades Drive. It grew quickly and approached the edge of residential properties on the hillside before firefighters were able to turn back the flames and prevent substantial property damage.

The flames continued to burn on Tuesday but the total acreage remained at 40 acres as of Tuesday evening, with about 30% containment.

Roughly 295 firefighters from various agencies had been used to fight the blaze. One civilian injury and three firefighter injuries were reported. Eight structures were damaged, but none were destroyed. More than 600 homes had been evacuated.

With Santa Ana winds expected to kick up again later this week fire officials are reminding the public to be prepared to evacuate quickly and to take steps to improve fire safety around their home.

For starters, pack an emergency kit and leave it near your door.

"Certainly medications are very important," said Capt. Tony Imbrenda with Los Angeles County Fire. "Paperwork. Cash in small denominations. Nutritional stuff, Powerbars - that kind of thing. Water and electrolyte mixes because there's no telling the kind of stress that you can be placed under during a major emergency incident like this."

"I have my quick pack ready to go," Exum said. All of the paperwork, checkbooks, medicines for my dog. That's ready to go by the front door and I have my fireproof safe ready to go with some documents in it."

Along with packing valuables, officials advise homeowners to remove hazards from the outside of their home.

"A lot of times folks are splitting logs and stacking wood up against the house,"Imbrenda said. "That's a classic place where embers can take hold and transfer fire to the house. Harden the home with boxing in the eaves. There's construction materials there."