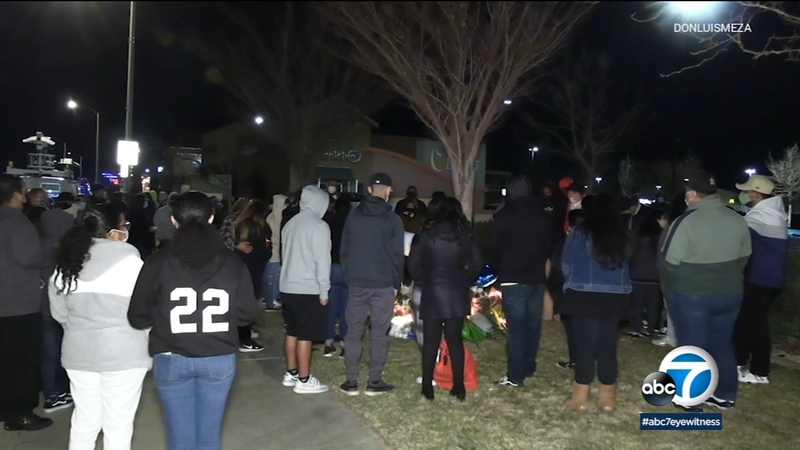 PALMDALE, Calif. (KABC) -- Dozens of family members and friends gathered Tuesday evening in Palmdale to honor to teenagers who were killed when a hit-and-run driver slammed into their car over the weekend.

Albert Cruz, 17, and Sergio Martinez, 18, were pronounced dead at the scene, near the intersection of 10th Street West and Avenue O-8, on Saturday evening, authorities said.

According to Los Angeles County sheriff's investigators, the victims' Honda was T-boned by a driver black 2015 Chrysler who ran a red light while fleeing from a previous collision.

A preliminary investigation indicated that the Chrysler was heading northbound on 10th Street West when the driver of that vehicle ran a red light at Avenue O-8 and slammed into a dark gray 2018 Honda Civic, according to authorities.

A suspect fled on foot and was being sought after a hit-and-run crash in Palmdale that killed a 17-year-old boy and an 18-year-old man, authorities said.

The Honda, occupied by Cruz and Martinez, was heading westbound on Avenue O-8 at the time of the impact, investigators said.

After the deadly crash, the suspect in the other vehicle fled on foot and remains at large, authorities said. A description of the person being sought was not available.

Anyone with information about the crash is asked to call Detective Day of the sheriff's Palmdale station at (661) 272-2423.