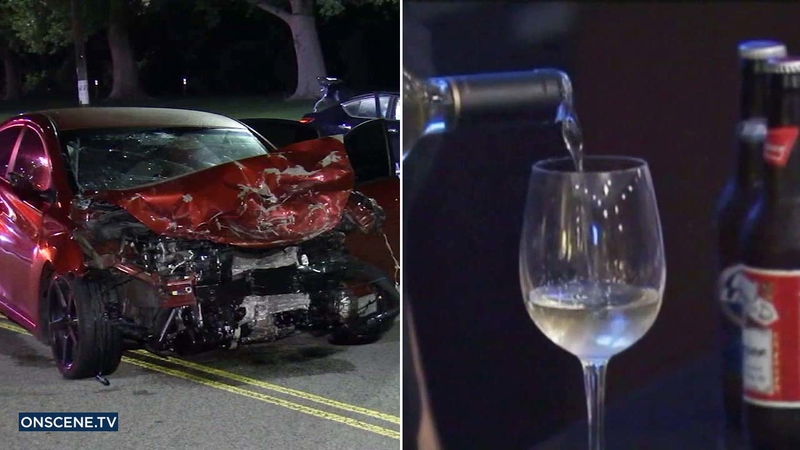 LOS ANGELES (KABC) -- Driving under the influence is blamed for some 10,000 deaths a year. A panel says lowering the drunken-driving threshold can decrease that figure.

The U.S. government-commissioned report by a panel of the National Academies of Sciences, Engineering and Medicine recommends significantly lowering the drunken-driving threshold from .08 to .05.

Currently, every state in the country has a .08 blood-alcohol concentration threshold. A Utah law passed last year that lowers the state's threshold to 0.05 doesn't go into effect until Dec. 30.

"We know that alcohol-impaired driving is a major problem still in this country," said Doug Shupe, a spokesperson for the Automobile Club of Southern California.

Shupe says even one drink can be too much to safely operate a car.

"People should not drink and drive at all. Regardless of how little you have had to drink or how little of a distance you think you have to go, getting behind the wheel after any amount of alcohol is potentially putting your life at risk and putting others on the road at risk as well," Shupe said.

The new report found that reducing the legal limit from .08 to .05 could help reduce the amount of alcohol-impaired driving deaths nationwide.

The amount of alcohol required to reach 0.05 would depend on several factors, including the person's size and whether the person has recently eaten. The report cites studies indicating most women over 120 pounds would reach 0.05 after two drinks. Men weighing up to about 160 pounds would likely reach the lower threshold at two, and those over 180 pounds at three.

Reaction to the recommendation is mixed.

"I think that's a bad thing, actually because I think people should be able to go out and have a drink and then come home. I think that's responsible," said Carla Commagere, a Laguna Beach resident.

"I think people need to be far more safe about what they drink, and if there's other options instead of driving, they should take that option. But if lowering it is going to help, of course we should," said Yulianna Valtierra, a Pasadena resident.

"Drink as much as you want, just don't drive afterwards. Be responsible, how about that?" Woods said.

Each day, 29 people in the U.S. die in alcohol-related crashes. Forty-percent of those killed are not the drunken driver.

"These are entirely preventable if people would just have conversations and understand the dangers that they're putting themselves in and others in if they get behind the wheel after drinking," Shupe said.

In the report, the panel also recommended that states significantly increase alcohol taxes and make alcohol less conveniently available, including reducing the hours and days alcohol is sold in stores, bars and restaurants. Research suggests a doubling of alcohol taxes could lead to an 11 percent reduction in traffic crash deaths, the report said.

It also calls for cracking down on sales to people under 21 or who are already intoxicated to discourage binge drinking, and putting limits on alcohol marketing while funding anti-alcohol campaigns similar to those against smoking.

The report cites studies that show the United States lags behind other high-income countries in preventing drunken-driving fatalities. More than 100 countries have adopted the 0.05 threshold. In Europe, the share of traffic deaths attributable to drunken driving was reduced by more than half within 10 years after the standard was dropped, the National Transportation Safety Board said in 2013. The safety board has also recommended the 0.05 threshold.
Report a correction or typo
Related topics:
traffic fatalitiesduintsbdrunk driving deathdrunk drivingroad safetyu.s. & worlddrinkingdui crashdriving
Copyright © 2021 KABC-TV. All Rights Reserved.
More Videos
From CNN Newsource affiliates
TOP STORIES