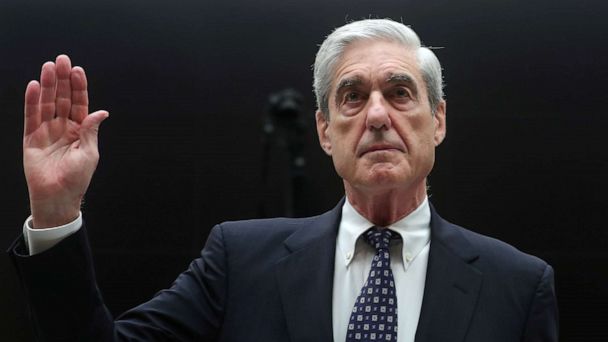 ABCNews
By KENDALL KARSON
Following more than six hours of questioning of former special counsel Robert Mueller before two different congressional committees, Democrats and Republicans remain largely splintered on impeaching President Donald Trump, even as nearly half of Americans show little movement on their support or opposition to the move, according to a new ABC News/Ipsos poll.

Among those who read, saw or heard about Mueller's testimony, 47% said it made no difference in their views about impeaching the president. The public hearings had opposing impacts based on partisanship: among Democrats, 48% said they are more likely to support the process of impeachment that could ultimately lead to Trump's removal from office, 8% said they are less likely to support impeachment and 44% said they feel the same as they did prior to Mueller's testimony.

An overwhelming majority of Americans -- 71% -- said that they had either read, seen or heard about Mueller's testimony this week, the first time he publicly answered questions about his 22 months-long investigation into Russian interference in the 2016 presidential election and possible obstruction of justice by the president, which culminated in a 448-page report.

But a majority of Americans expressed little confidence in the country's ability to stave off potential foreign attacks on U.S. democratic institutions in 2020, after Mueller testified that Russia's effort to interfere in 2016 "wasn't a single attempt ... they expect to do it during the next campaign."

Also, 54% of Americans said that they are not confident in the capability of the U.S. to effectively defend itself from potential foreign government interference in the 2020 presidential election.

Only 17% said they were very confident and 27% were somewhat confident.

There were also large partisan differences on this question -- with 25% of Democrats saying they are very or somewhat confident, compared to 77% of Republicans. Independents fell in between, at 40%.

Those who read, saw or heard about the testimony were asked in a follow up question to offer a response in only a few words about what comes to mind when thinking about Mueller's testimony. One independent voter said, "Republicans for the president, Democrats against the president," mirroring the public response to the testimony, with enormous variance in what partisans said came to mind.

In the open-ended question, most Republicans described the testimony as a waste of time and taxpayer dollars or questioned the competence and fairness of Mueller. Fewer than 2% of Republicans said the testimony was valuable or in some way made the case against Trump.

Among Democrats, although some expressed disappointment in Mueller's demeanor and the nature of the testimony, an overwhelming majority said the testimony demonstrated that Trump had colluded with the Russians, obstructed justice or deserved to be impeached. Only 4% said that the testimony was a waste of time or taxpayer money.

In their open-ended responses, Independents were much more likely to echo the comments made by Republicans than those made by Democrats. A majority of self-described Independents -- 60% -- described the testimony as a waste of time and taxpayer money or questioned Mueller's fitness. About one in five -- 19% -- of Independents mentioned that the testimony proved or confirmed Trump's guilt. The remaining 20% of Independents had more mixed assessments.

This ABC News/Ipsos poll was conducted by Ipsos Public Affairs' KnowledgePanel July 25-July 26, 2019, in English and Spanish, among a random national sample of 577 adults. Results have a margin of sampling error of 4.5 points, including the design effect. See the poll's topline results and details on the methodology here.
Report a correction or typo
Related topics:
abc newsnational
Copyright © 2020 ABC News Internet Ventures.
More Videos
From CNN Newsource affiliates
TOP STORIES