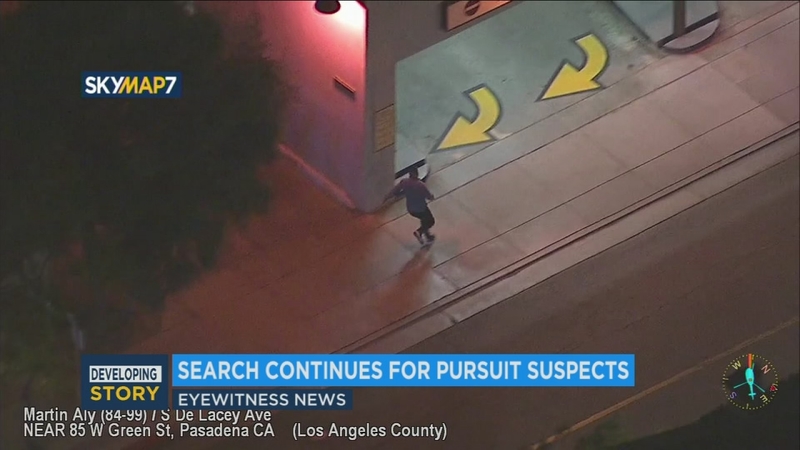 3 suspects sought after leading CHP on chase to Pasadena

PASADENA, Calif. (KABC) -- Authorities on Friday are still looking for three suspects who led the California Highway Patrol on a chase from Orange County to Pasadena Thursday night. The suspects might also be responsible for an armed robbery in Laguna Niguel.

The chase started about 11 p.m. in Orange County when Buena Park police initiated the pursuit. A white Ford F-150 with paper plates was seen traveling at moderate speeds on the 10 Freeway.

The suspect eventually transitioned onto the 110 Freeway, which ended onto surface streets in South Pasadena.

The driver continued traveling down Arroyo Parkway into Pasadena and then headed through Marengo Avenue.

At times, the suspect blew through stoplights and intersections and drove by the Pasadena Police Department and City Hall.

The suspect continued weaving through surface streets. At one point, he traveled in the wrong direction on Union Street, a one-way road.

While the suspect was traveling the wrong way on Green Street, two of the other suspects fled from the vehicle and ran toward Paseo Colorado.

The driver then bailed from the vehicle and ran into the parking structure in the 100 block of West Colorado Boulevard.

Authorities checked the parking structure and the area where the other two suspects fled, but did not find any of them.

As of Friday morning, the suspects were still outstanding.