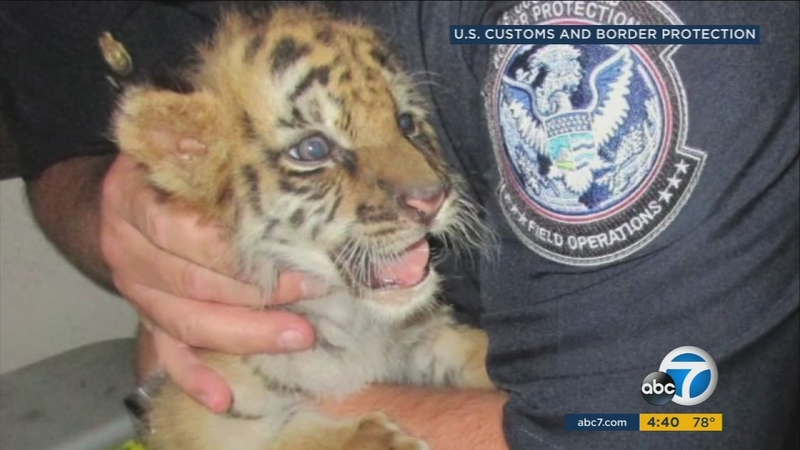 PERRIS, Calif. (KABC) -- A Bengal tiger cub may look cute and cuddly now, but in a few months it'll weigh close to 40 pounds and would be a danger to people.

But that didn't stop a Perris teenager from trying to smuggle a Bengal tiger cub into the U.S. and take it home as a pet, according to authorities.

Luis Valencia, 18, was stopped by U.S. Customs and Border Patrol agents at the Otay Mesa Port of Entry on Wednesday. Agents said because of issues with his vehicle identification number, he was asked to move his vehicle over to a secondary inspection area. An inspector then noticed the cub lying on the floor between the legs of the passenger.

Valencia claimed that he came across a man walking a Bengal tiger on a leash in Tijuana, and the man offered to sell him a tiger cub for $300. He claimed that he paid the money, took possession of the animal and then proceeded back to the border.

Agents said Valencia told them he intended to keep the tiger as a pet.

"We see smuggled birds, other items, and I've seen snakes. (But) this goes in the most unusual category," said U.S. Customs and Border Protection spokesperson Joseph Misenhelter. "This is an international treaty violation federal law issue, so there's prosecution going forward at this point."

Valencia has been charged with smuggling and unlawful importation of wildlife. If convicted of smuggling, he faces a maximum sentence of 20 years in prison, a fine of $250,000, or twice the gross gain or loss caused by the offense.

According to the criminal complaint, the cub is believed to have a market value of $1,500 if sold in the states.

The Bengal tiger is an endangered species. Only 2,500 wild specimens are believed to exist.

The animal was confiscated and is now being cared for at the San Diego Zoo Safari Park. Officials said the cub is about five or six weeks old and weighs just over 6 pounds.

"Overall he's in pretty good shape," principal veterinarian Dr. Jim Oosterhuis said. "Since he took a bottle from us, which are strangers to him, we have a good chance that he will have a good upbringing."

The San Diego Zoo Safari Park said visitors will be able to view the tiger cub at the Animal Care Center's nursery window at various times throughout the day.

As for the animal's future?