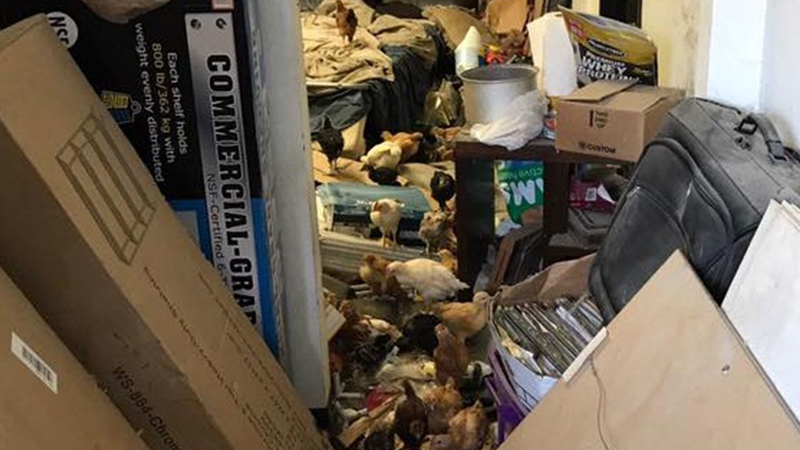 MONTCLAIR, Calif. (KABC) -- Nearly 2,000 animals, including chickens, exotic birds, fish and snakes, were found inside a Montclair commercial building, police said. Many of the animals were reportedly dead.

Authorities made the discovery in the 4600 block of Arrow Highway while they were serving an arrest warrant on a suspect -- identified only as a man in his 50s -- regarding an unrelated charge.

According to the Inland Valley Humane Society, their agency and the Montclair Police Department were originally called to take two dogs from the suspect.

They responded to the warehouse after hearing noises coming from the industrial complex. Humane Society personnel said the suspect was living in the complex with all of the animals.

Silvia Lemus, with the society, said she's never seen something like this.

"This is the worst that I've ever seen in my nine years with the organization," she said. "Inhuman conditions, deplorable conditions, completely unsanitary."

By their estimation, between 1,000 and 2,000 chicks and chickens in addition to 100 exotic birds were being kept in what they called "appalling conditions." About 250 of the animals found were dead.

Rescuers could find no food or water for the animals in the building, and there was little ventilation. According to the Humane Society, the warehouse was covered in feces and filled to capacity with trash.

The birds found alive were taken by the Humane Society to be evaluated and will remain there until the investigation is complete. The society is even building an enclosure at its undisclosed facility in Chino Hills to let the chicks and chickens roam the area once they're OK.

A neighbor to the complex said it appeared the suspect was acting as a pet wholesaler. Another neighbor said she wouldn't talk to the man because he "seemed off."

"It's sad because they're animals. It's pathetic," said Peggy King, who works near the warehouse where the animals were found. "For people to be like this, I just don't even comprehend it. Because, really, what are you doing with all those animals?

"And then I just saw those baby chicks being delivered last week," she added. "So that was kind of breaking my heart -- when I found out there was reptiles in there. So you wonder: What was he doing with baby chicks?"
Report a correction or typo
Related topics:
pets & animalsmontclairsan bernardino countyanimal crueltyarrestanimalspolicewarrant arrestshoarding
Copyright © 2021 KABC-TV. All Rights Reserved.
TOP STORIES
Delta flight from LAX diverted after unruly passenger makes 'terroristic threats'
LA Pride celebrations return to West Hollywood
Community holds ceremony for Monique Muñoz in West LA
'Thrive with Pride Celebration' on ABC7 highlights the LGBTQ+ community in SoCal
Former inmate who graduated from CSULB with honors accepted into master's program
CA teen who fought off bear to protect family dogs gets award
5 years later, onePULSE Foundation working to affect real change
Show More
Over 20 quakes, including magnitude-4.6 temblor, strikes Salton Sea
What mom, daughter did with 80,000 penny child support payment
CA announces 'Vax for the Win' winners
14 hurt, 1 suspect arrested, 1 at large after mass shooting on Austin's 6th Street
Proposed California bill would convert shuttered malls into housing
More TOP STORIES News