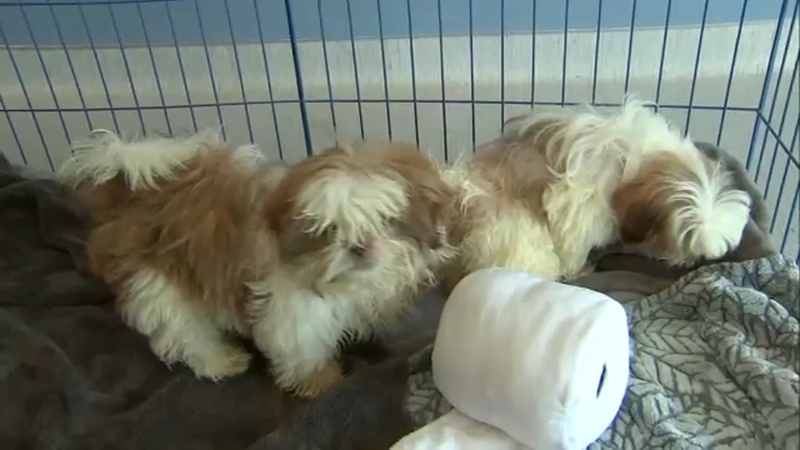 ORANGE, Calif. (KABC) -- About 140 Shih Tzu-like dogs were rescued Thursday from a single house in Orange and brought to Orange County Animal Care, which is now at capacity.

Some of the dogs were found with patches of fur missing.

"It's an incredible feat to be able to bring everybody in and get them all evaluated medically, get them all treated and, of course, housing them and caring for them," explained Jessica Novillo from O.C. Animal Care.

The dogs were rescued from a multimillion-dollar home in the 3800 block of East Woodbine Avenue.

The Orange Police Department said the conditions inside were filthy, some of the dogs covered in their own waste.

One of the homeowners - Ed Reitkopp - is an attorney with a law firm in Cerritos. In a statement, a representative for the firm said Reitkopp has been told not to come to work.

"We have many animal lovers at the firm who are troubled by the reported conditions and hope that all the rescued dogs are safe and healthy," the statement read.

Police said an animal cruelty investigation is underway. The animal control agency said that an ongoing investigation means they can't comment on the condition of the dogs.

But they're hoping to line up people to eventually adopt the dogs or other pets as the center is now packed.

"We were fortunate that over the last week, we had over 170 adoptions just with the fee waiver, which made some room, but obviously now we're back at capacity," Novillo said.

The Orange case, though, sparked an urgent community response.

Some San Clemente women jumped into action when they learned of all the dogs being removed. They loaded up their cars with about 500 pounds of food, they said.

The two SUVs were crammed full of donated dog supplies as well. They took everything to the shelter.

"We've been working all night and woke up this morning and were able to meet at 8:15 at my house, got all the orders of all the people who had given us stuff, loaded up our cars, and now we're here," said Tracey Denney of Leashes of Love.

The owners have been hit with misdemeanor animal cruelty charges but investigators say they may be bumped up to felonies.