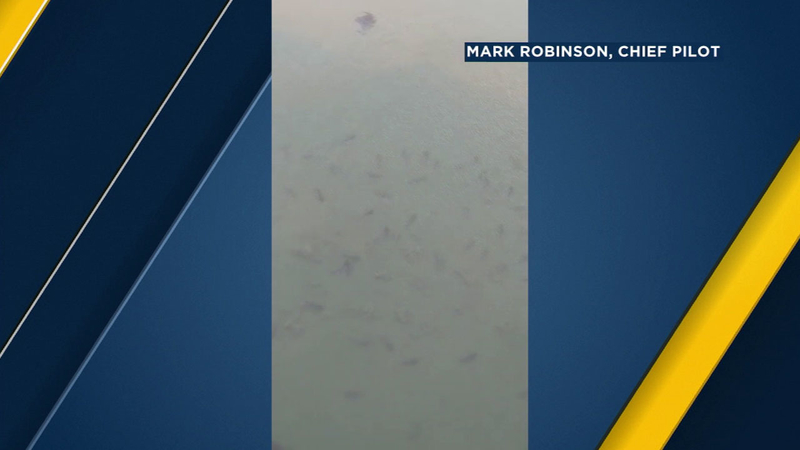 SEAL BEACH, Calif. (KABC) -- Pilot Mark Robinson was giving a flight lesson when he and the client saw something below that caused a double-take.

"We were with our student Dave and he suddenly turns to his right and goes, 'what's that?'" the chief pilot with Revolution Aviation said. "We see fins, then wiggly tails and we're like, 'Oh my gosh, they're sharks.'"

They saw two pods of leopard sharks - about 100 altogether were swimming in the shallow water, just east of the Seal Beach Pier - before 8:30 in the morning Thursday.

While his student took control, Robinson started shooting video out of the window of his helicopter. His first thought was that no one was in the water.

Robinson said he would later learn more about the leopard sharks, which are believed to be harmless unless provoked.

"They'll swim around you. However, these were pregnant leopard sharks that were coming up to the shallow waters to warm their bodies," Robinson said.

He added that in his 10 years of flying in Southern California, he's only seen a shark one other time and that was just four months ago also by the Seal Beach Pier.

He said he's not sure what type of shark he spotted earlier this year, other than it was about 15 feet long.

Seal Beach and neighboring spots have seen more shark activity lately. Experts said it could be because of warmer water related to El Niño.