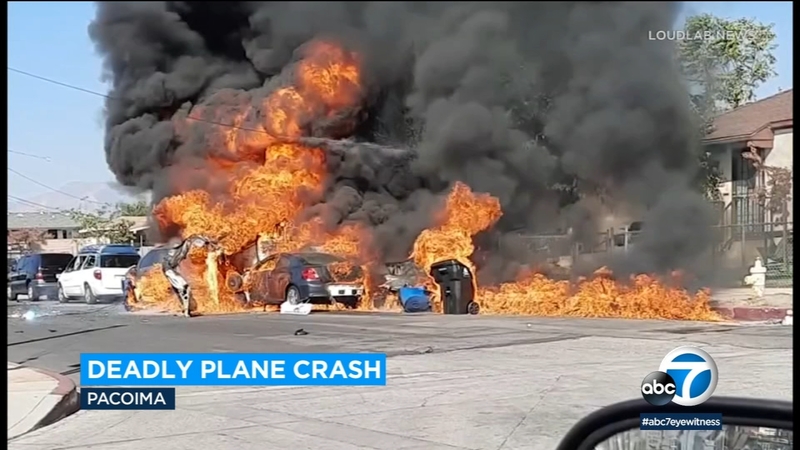 PACOIMA, LOS ANGELES (KABC) -- A Civil Air Patrol pilot was killed when a small plane slammed into multiple vehicles that were parked on a residential street in Pacoima on Thursday morning, igniting a fire near several homes, officials said.

The Civil Air Patrol's California Wing later identified the pilot as a member of that organization, but did not release the pilot's name.

The plane was identified as a Cessna 182T.

The Civil Air Patrol is a citizen auxiliary of the U.S. Air Force. In California, there are more than 3,600 members in eight groups and 72 squadrons and wing units providing emergency services, cadet programs, and aerospace education. They operate a fleet of 27 aircraft and 45 ground vehicles. The volunteer members help with emergency search missions, promote education and other public service functions.

In a statement, Federal Aviation Administration spokesman Ian Gregor said the crash happened as the single-engine Cessna was approaching the airport's Runway 12.

LAFD Capt. Erik Scott said the plane hit "energized power lines" which then fell to the street below. "Firefighters then immediately cordoned that area off with yellow tape to ensure safety, so no one gets electrocuted," he told reporters at the scene, adding that the LAFD was working with the city's Department of Water and Power to deenergize the lines.