Feinstein, a 26-year incumbent, is a heavy favorite. She points to her seniority on key committees and track record of fighting for gun control and protecting the environment as evidence she deserves another term.

"I'm running for the United States Senate to protect California in what are difficult and contentious times," Feinstein said in a video from Washington, where she spent Tuesday's primary night.

De Leon, the former state Senate leader, has an uphill battle ahead of him. In a sweeping speech to supporters Tuesday night, he outlined his pitch for the fall: Feinstein is too entrenched in Washington to fight for liberal interests and too old to serve another term.

"We decided to give voters a real choice - between new ideas and the same old, same old," he declared, later adding, "this race is a fight for California's future."

Feinstein, 84, would be one of the oldest Senators to ever serve if she is re-elected. She was first elected to the Senate in 1992. 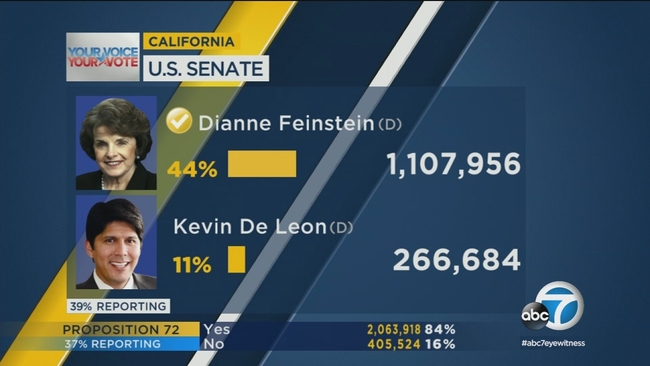