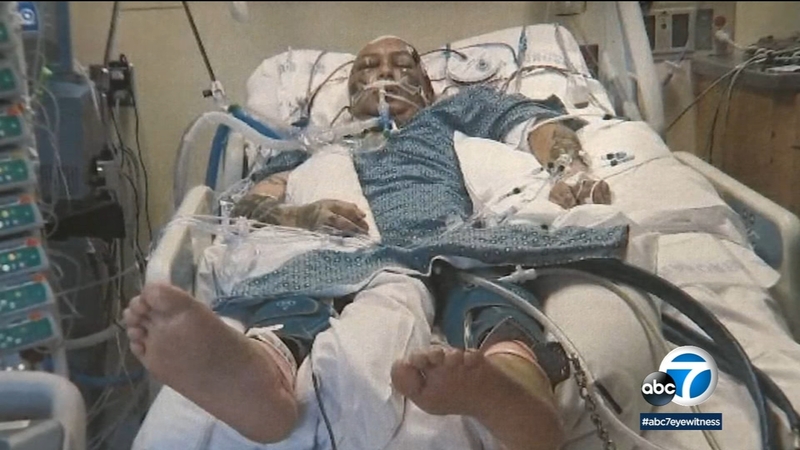 ADELANTO, Calif. (KABC) -- "All I want to know is what happened to him"

Melissa Castro, a grieving wife and new mother, is pleading for answers from ICE officials after the death of her 27-year-old husband.

He suffered a cerebral hemorrhage the day he was scheduled to appear for his immigration status hearing. He ended up in the hospital, in a coma and paralyzed, days after his wife gave birth to their son.

"I am saddened that he is no longer with me and with us and that he was not able to meet his son that he had always hoped for," Castro said.

"I don't know to tell you the truth how I'm going to live with out him because he is going to be and is irreplaceable," said Lucia Ibarra, his sister.

Ibarra's family says authorities tried to pull over the 27-year-old for crossing the double yellow lines of a carpool lane in late January. Ibarra failed to stop.

"I sat with him the next morning when I saw him and I said what was going on through our head when you did this and he said I was afraid, I was afraid of what the outcome would be if I'd stopped," his sister said.

Ibarra, a commercial driver for Coca Cola whose DACA status had expired, was released from jail on Jan. 28, taken into custody by ICE officials and transferred to the Adelanto Detention Center.

Two weeks later, he was in a coma. Two weeks after that, the family says ICE left a letter in Ibarra's hospital room saying he had been released from custody.

According to the family, ICE and GEO Group, the private company that operates the Adelanto Detention facility, has kept them completely in the dark.

"What happened to Jose the day that he collapsed?" asked Shannon Camacho, with the activist group CHIRLA. "Did he receive swift and appropriate medical care? Why did ICE release him from their custody in such a heartless manner? What are they hiding and why won't they tell the truth to Jose's family?"

Last year, the Office of the Inspector General released a report citing a number of "serious" violations during a surprise inspection of the GEO Group's Adelanto detention center.

Violations included doctors signing off on medical assessments that never happened, and detainees being allowed to hang knotted sheets inside their cells, despite the facility's extensive history of suicide attempts.

"What bothers me is that we have some prisons that are private prisons," said Rev. Walter Contreras with the National Latino Evangelical Coalition. "Who are they accountable to? How are we able to make sure that our kids and our relatives are being treated justly?"

The family says Ibarra died in March after he was removed from life support.

When asked for comment, ICE would only provide confirmation of the dates he was in custody.
Report a correction or typo
Related topics:
politicsadelantosan bernardino countyicedeath in custodyimmigration
Copyright © 2021 KABC-TV. All Rights Reserved.
More Videos
From CNN Newsource affiliates
TOP STORIES