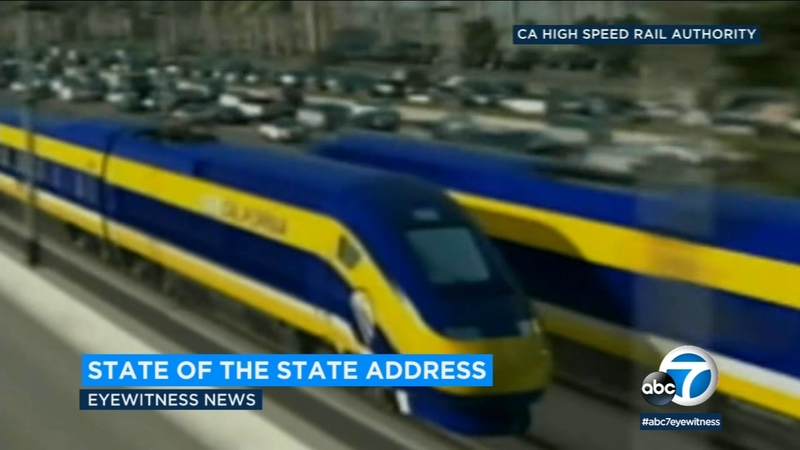 SACRAMENTO, Calif. -- California Gov. Gavin Newsom declared Tuesday there "isn't a path" for completing the state's plan for a high-speed rail line between San Francisco and Los Angeles, yet his office insisted he is fully committed to building such a project.

Newsom, delivering his first State of the State address, said he'd shift his focus to completing just a 171-mile segment of the line already under construction in the state's Central Valley. The project is key to the economic vitality of the state's agricultural heartland, he said.

A high-speed rail line linking Los Angeles to San Francisco was the goal when voters approved a ballot measure in 2008. The roughly 520-mile line initially was estimated to cost $33 billion and was pegged for completion in 2020. Officials eventually hoped to connect the line to San Diego and Sacramento.

Subsequent estimates more than doubled the cost to $77 billion and pushed the timeline to 2033.

"Let's be real," Newsom said. "The project, as currently planned, would cost too much and take too long . . . Right now, there simply isn't a path to get from Sacramento to San Diego, let alone from San Francisco to L.A. I wish there were."

Newsom said he'd continue doing environmental reviews for the LA-San Francisco line and seek private investment to connect the Central Valley to the state's major hubs, prompting confusion about whether he actually was changing the policy of his predecessor, Jerry Brown.

Newsom's spokesman Nathan Click said the governor is committed to completing the longer line with additional private and federal money "as the Central Valley section demonstrates the viability of the broader project."

The questions about Newsom's rail plans clouded his first State of the State address in which he outlined his vision for leading the nation's most populous state. California, he said, faces "hard decisions that are coming due" on clean water, housing and homelessness.

Newsom used the speech to contrast his administration with Brown's as much as he did to take issue with President Donald Trump. He blasted the president's views on immigration - Newsom called the border emergency "a manufactured crisis" - but also complimented Trump's calls for lowering prescription drug costs.

Trump has criticized California's high-speed rail plan. Newsom said the state risked having to return $3.5 billion in federal money if building stops on the Central Valley leg or it doesn't complete the environmental reviews. Rail leaders have long said they do not have enough state money to complete the line. Private investment has been tied to getting more government investment.

Newsom did not provide any fresh details about how he planned to leverage or gather private money in a way his predecessors could not.

His speech left lawmakers with different interpretations of how the project would move forward.

Democratic state Sen. Anna Caballero, who represents part of the Central Valley, called the shift to a line only from Bakersfield to Merced "disappointing." But she said she hopes to see that line connected to other state hubs at some point.

"People need to see it move to really feel like it's important," she said.

Republican state Sen. Jim Nielsen of Fresno said Newsom's comments were an acknowledgement the full train would never be completed.

"It cannot be achieved, and the governor has essentially admitted it," he said. "This entire thing has now changed from whether or not there's going to be a high-speed rail to what's going to be left for central California."

Newsom rejected the idea that his plan would create a "train to nowhere" and said building in the Central Valley would help revitalize the economically depressed region. He also replaced Brown's head of the state board that oversees the project and pledged more accountability for contractors that run over costs by putting information about how rail dollars are spent online.

Newsom also announced a new head of the state water board, a new chair of the state board of education and a new task force on housing and homelessness. It's typical for new governors to remake the administration, even if executive power remains within the same party.

He announced the creation of the new Commission on Homelessness & Supportive Housing to address what he said is a moral issue that has become a public health crisis. His administration recently sued the Orange County city of Huntington Beach, accusing it of not meeting mandated affordable housing goals.

The governor has invited the leaders of 47 other noncomplying cities to a meeting next week for what he called "a candid conversation."

"I don't intend to file suit against all 47, but I'm not going to preside over neglect and denial," he said. "These cities need to summon the political courage to build their fair share of housing."

Newsom also promised to have a plan within 60 days for dealing with the recent bankruptcy filing by Pacific Gas & Electric Corp. after years of devastating wildfires.

He said he has convened a team of the nation's best bankruptcy lawyers and financial experts from the energy sector to work with his administration to develop a strategy to protect the state's power grid, wildfire victims, company employees and ratepayers.

"We are all frustrated and angry that it's come to this," Newsom said. "PG&E didn't do enough to secure dangerous equipment or plan for the future."