Democrats continue to scrutinize the way Attorney General William Barr has released the report, taking nearly a month to review it.

In a tweet, Sen. Kamala Harris said, "Barr is acting more like Trump's defense attorney than the nation's Attorney General. His press conference was a stunt, filled with political spin and propaganda."

Barr is acting more like Trump’s defense attorney than the nation's Attorney General. His press conference was a stunt, filled with political spin and propaganda.⁰ ⁰Americans deserve the unvarnished truth. We need Special Counsel Mueller to testify publicly in Congress.

California Rep. Ted Lieu tweeted: "Dear @TheJusticeDept AG Barr: Whenever you leave, you may want to consider a career at a PR firm, since that job does not require impartiality or taking an oath to the Constitution."

Dear @TheJusticeDept & AG Barr: Your 4 page spin memo of the #MuellerReport will not be remembered kindly by history. There was corrupt intent all over the place. https://t.co/iL07EtyAUu

And this was what Rep. Eric Swalwell said about the report this morning on ABC News's Special Report:

"If you bury the evidence deep enough so no one can find it, you don't get off scot-free, there are crimes of obstruction of justice. This is a double digit obstructer in that the Mueller report found 10 instances where the president sought to obstruct justice."

But there's a very different reaction from Republican Rep. Steve Scalise, who said "Democrats owe the American people an apology. They must now stop harassing @realDonaldTrump and his family."

With the formal release of the #MuellerReport, two things are clear:

Democrats owe the American people an apology. They must now stop harassing @realDonaldTrump and his family. pic.twitter.com/oNIXg8pFnN 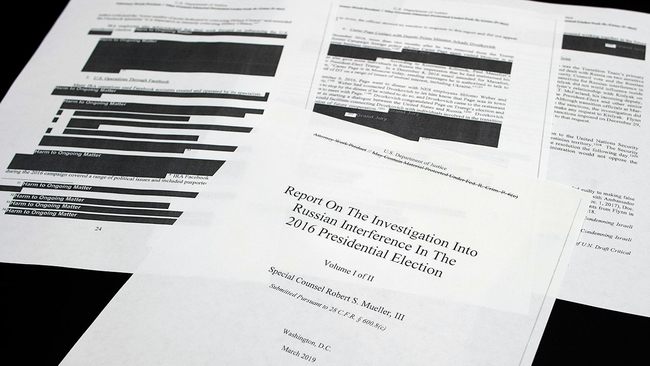