KABC
By Marc Cota-Robles
NEWPORT BEACH, Calif. (KABC) -- Vice President Mike Pence is in Southern California, less than 24 hours after he ramped up the rhetoric against the NFL and walked out of a football game in protest.

Pence arrived in the Southland on Sunday and attended a fundraiser in Beverly Hills in the evening. He's on a three-day visit to raise money and talk about President Donald Trump's plan for a tax overhaul.

Pence's visit comes after he walked out of an NFL game between the Indianapolis Colts and the San Francisco 49ers on Sunday. Some 49ers players knelt during the national anthem.

I left today's Colts game because @POTUS and I will not dignify any event that disrespects our soldiers, our Flag, or our National Anthem.

Before the game, Pence tweeted a selfie with a caption saying he was looking forward to cheering on the Colts.

Looking forward to cheering for our @Colts & honoring the great career of #18 Peyton Manning at @LucasOilStadium today. Go Colts! pic.twitter.com/C3aCYUNpqG

However, it turned out that the photo was a repost of the very same photo he posted to social media in 2014.

California Rep. Adam Schiff said the incident was a waste of funds.

"When you think of probably the many tens of thousands of dollars that they wasted so the vice president could knowingly go to a football game with the deliberate intention of leaving the football game to try to make some political point, it's a terrible abuse and waste of taxpayer money," Schiff said.

Trump said Pence's attendance at the game was "long planned."

The trip by @VP Pence was long planned. He is receiving great praise for leaving game after the players showed such disrespect for country!

In his tweet, Trump also said that Pence "is receiving great praise for leaving game after the players showed such disrespect for country!"

Pence is expected to take off from Los Angeles International Airport and arrive at John Wayne Airport at around 1:30 p.m.

Pence will be joined by House Majority Leader Kevin McCarthy at the Newport Beach fundraiser. Those who are planning to protest say the Trump administration and other Republican leaders do not represent the values of Orange County voters.
Related topics:
politicsnewport beachorange countynational anthemvice president mike pencemike pencepresident donald trump
Copyright © 2020 KABC-TV. All Rights Reserved.
RELATED 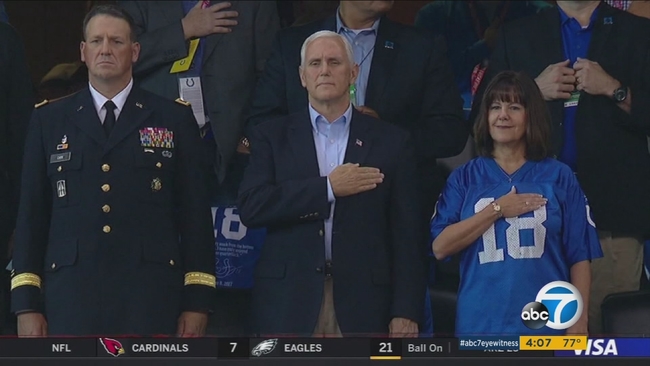