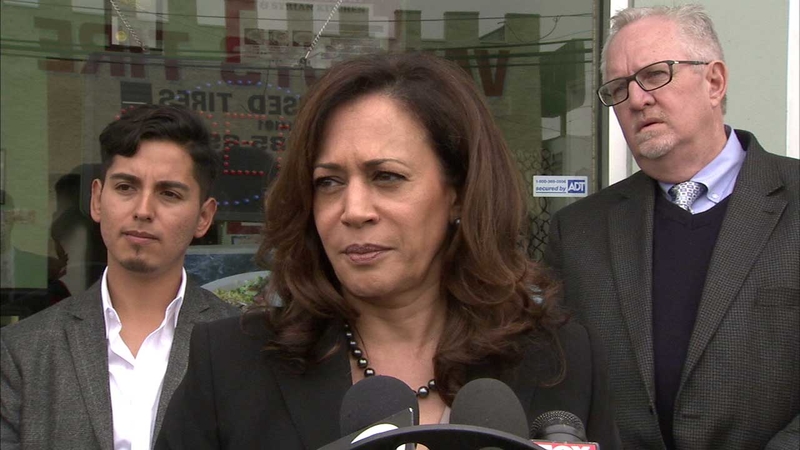 The Department of Homeland Security memos spell out an aggressive approach to immigration enforcement.

Agents will now target immigrants living in the U.S. illegally who have been charged with or convicted of any crime.

MORE: Deportation possible for millions in US illegally amid revision of Trump's immigration rules

"The message from this White House and from the DHS is that those people who are in this country and pose a threat to our public safety or have committed a crime will be the first to go and we will be aggressively making sure that that occurs," said White House Press Secretary Sean Spicer.

As part of the enforcement step-up, Immigration and Customs Enforcement will be hiring 10,000 new agents and officers. In addition, Border Patrol will hire more than 5,000 new agents.

"This is not the kind of policy we want. We are a nation that was founded on immigrants," said Harris, who was in Los Angeles this week to talk about immigration issues.

She blasted the Trump administration's aggressive enforcement as unnecessary and un-American, pointing out how the broadly written directives will target potentially innocent undocumented immigrants.

"They're lowering the bar and in suggesting that anything, even that someone may have committed a crime might qualify for deportation, that's just extreme and outrageous," Harris said.

Harris added that the tone used by the White House is "vilifying immigrants because they are immigrants."

"There is a tone and underlying this policy that is suggesting that undocumented immigrants are criminals - period. And therefore are rightly then going to receive law enforcement as its first outreach."

Nile Zaino is one of the immigrants Harris met with on Tuesday. The 26-year old from Syria went through a two-year vetting process only to be left stranded in Turkey after Trump's executive order in January.

Zaino was able to join his wife and young son in Long Beach when U.S. courts blocked that order.

"Each country has the right to protect their border, but we can't include everybody, that everybody is bad, everybody is trying to attack us," Zaino said.

The DHS immigration directives have no impact on President Barack Obama's Deferred Action for Childhood Arrivals. DACA protects more than 750,000 young immigrants from being deported.