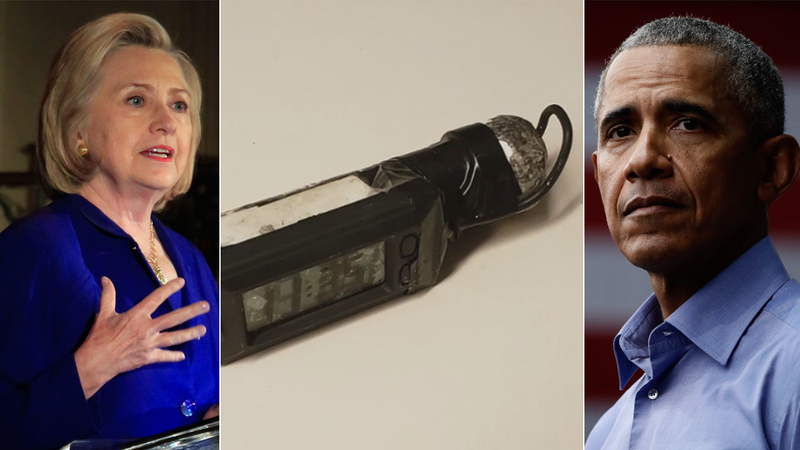 NEW YORK (KABC) -- Suspicious packages addressed to the homes of Hillary Clinton and Barack Obama were intercepted by Secret Service, authorities said on Wednesday. A live explosive device was also found at the CNN offices in New York City.

Another package addressed to Waters was intercepted at a Los Angeles postal facility.

There were no explosions and no reports of injuries.

The bombs were packed with powder shards of glass, a law enforcement official told The Associated Press.

The official said the devices were made from PVC pipe that was about six inches long and covered with black tape. Each device also had a small battery, similar to a watch battery. The official didn't say whether the powder was explosive.

The official, who viewed X-ray images of the device, wasn't authorized to discuss an ongoing investigation and spoke to The Associated Press on condition of anonymity.

Another suspicious package was addressed to Obama's residence, but it was intercepted by the Secret Service in Washington, D.C. on Wednesday, officials said. The former president declined to comment on the matter.

The Secret Service said both packages were identified as "potential explosive devices" during routine mail screening.

"We are fine, thanks to the men and women of the Secret Service," Hillary Clinton said at a Miami campaign event for Donna Shalala, a former Health and Human Services secretary who is running for Congress in Florida."Every day, we are grateful for their service and commitment -- and obviously never more than today."

A crude but operational pipe bomb also led to the evacuation of the Time Warner Center, home of CNN, in New York City.

'EXTREMELY ANGRY': During an event at the White House, First Lady Melania Trump and Pres. Trump condemned the attempted attacks on several Democratic targets, with Trump saying "in these times, we have to unify, we have to come together." https://t.co/ZHR4s1DdRe pic.twitter.com/PmZsrkonbt

Earlier this week, an explosive device was found in the mailbox of philanthropist and billionaire George Soros, who also lives in Westchester County.

The preliminary belief is that all devices appear to be of a similar pipe-bomb style construction and contained explosive material, law enforcement officials told ABC News. Investigators are working to determine if all the devices are connected.
Law enforcement sources also said there are concerns that other devices could still be making their way through the postal system. The incidents are being investigated by the FBI, ATF, Secret Service, U.S. Postal Inspection Service, NYPD and other local authorities.

The White House condemned the attempted attacks. White House spokeswoman Sarah Huckabee Sanders said in a statement: "These terrorizing acts are despicable, and anyone responsible will be held accountable to the fullest extent of the law." She adds: "The United States Secret Service and other law enforcement agencies are investigating and will take all appropriate actions to protect anyone threatened by these cowards."

Later, at a previously scheduled White House event, President Donald Trump said the "safety of the American people is my highest and absolute priority."

"We are extremely angry, upset, unhappy about what we witnessed this morning, and we will get to the bottom of it," Turmp added.

The devices all were sent to an FBI lab in Virginia to be studied. Officials provided no details on a possible suspect or motive.

We are aware of the suspicious packages sent to several locations on the East Coast. Right now, there is no nexus to Los Angeles. However, we are monitoring the situation and communicating with our federal and local law enforcement partners.

The packages were immediately identified during routine mail screening procedures as potential explosive devices and were appropriately handled as such. The protectees did not receive the packages nor were they at risk of receiving them.

The Secret Service has initiated a full scope criminal investigation that will leverage all available federal, state and local resources to determine the source of the packages and identify those responsible. 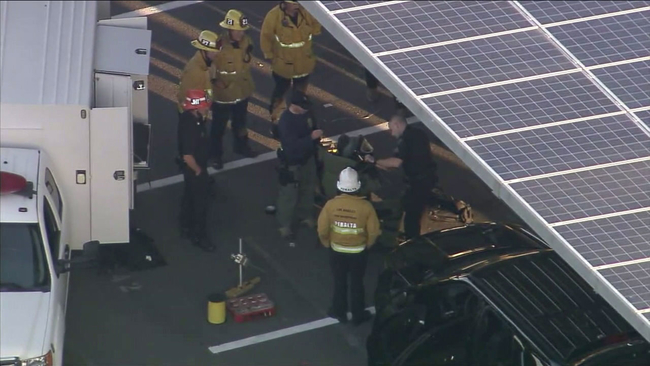