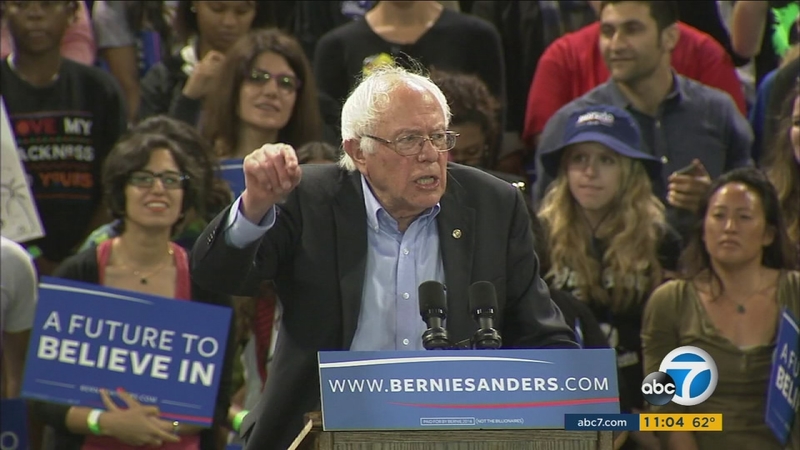 About 8,000 people were inside the rally held at the StubHub Center while another 13,000 were at an overflow area, according to Sanders' campaign team.

During the event, it was announced that Sanders had won the Democratic primary in Oregon while Hillary Clinton had declared victory in a close race in Kentucky.

"We just won Oregon and we're going to win California. I'm getting to like the West Coast," Sanders exclaimed to the crowd.

Several actors including Danny Glover spoke on Sanders' behalf at the rally, which was free and open to the public.

Many in attendance told ABC7 they vowed not to vote for Clinton if she wins the Democratic nomination.

"If Bernie doesn't win the nomination, there's already a movement to form another party," Asim Hamid of San Fernando said.

"People do not want to support a corrupt politician like Hillary Clinton, I'm sorry," said Vanessa Decker of Santa Barbara.

Sanders' visit comes six days before Clinton brings her campaign to Los Angeles for a pair of fundraisers. Next Monday, Clinton will attend an event at the home of Bryan Lourd, managing partner of the Creative Artists Agency talent agency, and Bruce Bozzi, co-owner of The Palm restaurant chain.

She will also attend an evening fundraiser in Hancock Park. California Democrats will vote in the presidential primary election on June 7.