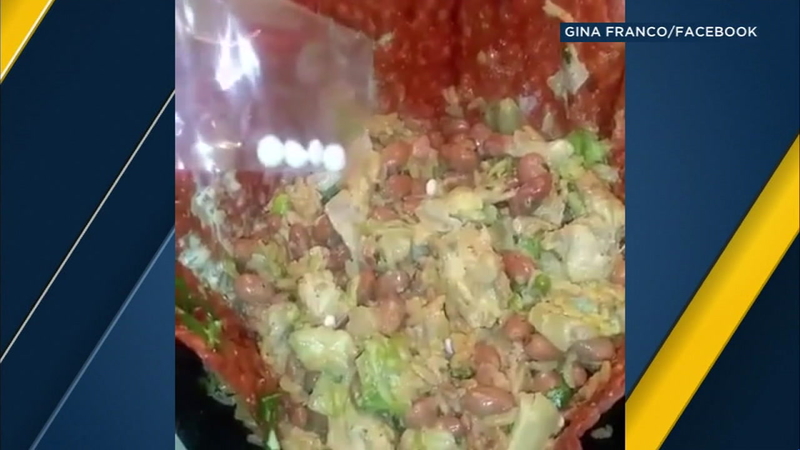 MENIFEE, Calif. (KABC) -- A woman is taking to social media after saying she found pills in her salads ordered from a El Pollo Loco restaurant in Menifee.

Franco ordered one salad for herself and another for her daughter. Not long after they arrived home and started eating, Franco noticed something strange.

El Pollo Loco released a statement regarding a woman's claims she found pills in her food.

Franco said she noticed white specks as she was mixing her salad and touched the substance.

"I noticed a tart," Franco said.

Franco said she collected about half a dozen white pills from the bottom of her salad and two more from her daughters.

She called the manager of the restaurant, who apologized.

"She apologized on the phone, and said -- I don't know if it it was something to be funny -- but she said, 'We do have a new burrito guy on the line and maybe he messed up on something,'" Franco said.

Franco went back to the store and talked to the manager in person.

"Her reaction was like. 'I'm sorry. These are something we definitely don't carry,'" Franco said. "These do look like pills don't they?'"

Franco was given a refund, but also called the Riverside County Sheriff's Department, which confirmed they are investigating the incident.

In a statement, a El Pollo Loco spokesperson said:

"El Pollo Loco is committed to serving the highest quality products, and food safety is our number one priority. This is the first we have heard of this video and we are very concerned. We take all claims seriously and value our customers and their experience at our restaurants. We immediately opened an investigation and are attempting to contact the customer directly."

Franco said authorities conducted a test and the pills did not test positive for narcotics, but they did liquefy when chemicals were put on it.