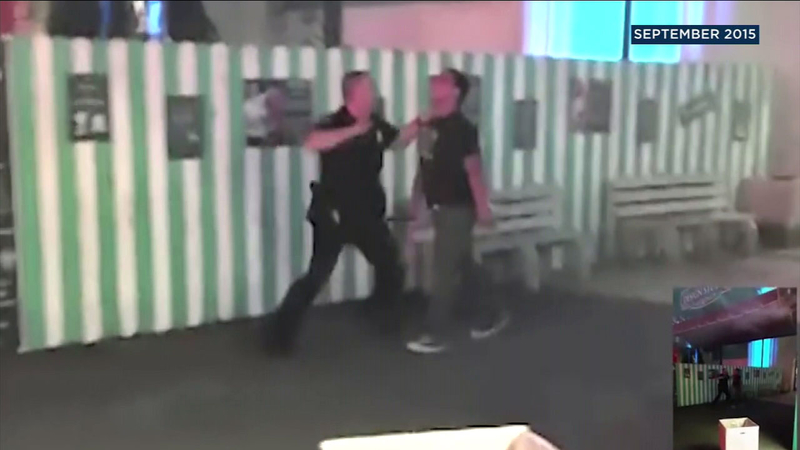 DOWNTOWN LOS ANGELES (KABC) -- Opening statements began Tuesday in the trial of two Pomona police officers caught on camera beating a teenager during an arrest in 2015.

In the video, the beating lasts just 12 seconds, but attorneys in court were analyzing it frame by frame. The video shows 16-year-old Christian Aguilar taken down by officers, and now three face federal charges.

The trial for two of those officers started in federal court in downtown Los Angeles. The government is charging Cpl. Chad Jensen of using excessive force. Jensen and Officer Prince Hutchinson are also charged with lying to cover it up.

The incident occurred at the L.A. County Fair in 2015. It started when Aguilar's father was arrested for public intoxication. Aguilar began recording it with his cellphone.

In the police report, Jensen said that Aguilar was "...walking up behind the officer and getting within arm's reach of his back...He was belligerent...He immediately took a fighting stance."

The prosecutor said those statements were lies to cover up the beating. Because of that, three officers were charged with obstruction of justice.

The defense said that from Jensen's perception, he was swung at and that he did not write a false report. They claim that he wrote what he remembered happening.

The defense also said the video shows the officer had to make a decision in less than a second to get the situation under control.

As he testified on the stand, smiling at times and appearing uncomfortable, Aguilar said he was nervous. He teared up as he saw the video of the incident. His mother was a police dispatcher, and he said he knew not to get too close to the officers because he didn't want to interfere.

He was asked, "Did you ever take a fighting stance at the officers?"

"Did you ever swing at the officers?"