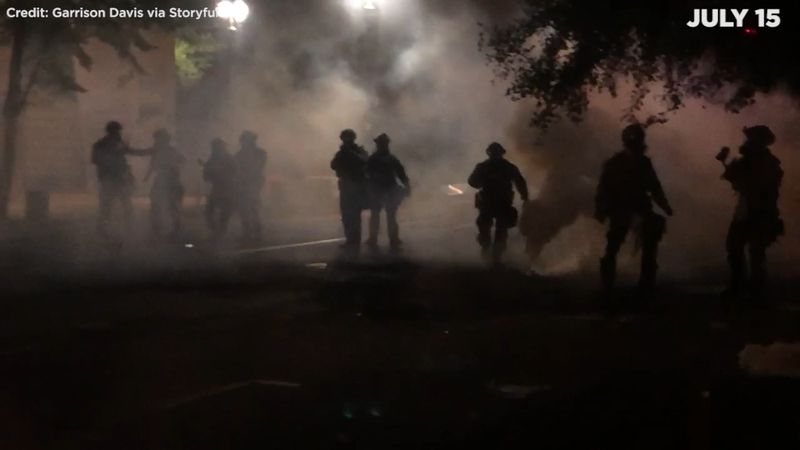 Federal officers use gas to clear protesters in Portland

PORTLAND, Ore. -- Oregon's governor says federal agents who have clashed with protesters in Portland, Oregon, will begin what she called a "phased withdrawal" from Oregon's largest city.

PORTLAND, Ore. (AP) - The Trump administration has started talks with the Oregon governor's office and indicated that it would begin to draw down the presence of federal agents sent to quell two months of chaotic protests in Portland if the state stepped up its own enforcement, a senior White House official said Tuesday.

The official stressed to The Associated Press that the talks with the office of Democratic Gov. Kate Brown are in the early stages and there is no agreement. The official was not authorized to publicly discuss private conversations and spoke on the condition of anonymity.

Before departing Wednesday for a trip to Texas, President Trump insisted federal troops would not leave Portland until local authorities "secured their city."

Police and protesters clash violently in Austin, Seattle, Aurora and Portland over the weekend.

The U.S. Marshals Service and Department of Homeland Security were weighing this week whether to send in more agents. The marshals were taking steps to identify up to 100 additional personnel who could go in case they were needed to relieve or supplement the deputy marshals who work in Oregon, spokesman Drew Wade said.

Homeland Security was considering a similar measure with Customs and Border Protection agents, according to an administration official with direct knowledge of the plans who was not authorized to speak publicly about the plans and spoke to AP on condition of anonymity.

The nightly Portland protests began after George Floyd's death at the hands of Minneapolis police and have grown to include the presence of federal agents in Portland and other Democratic cities.

Trump has praised the agents in Portland and on Wednesday reiterated his criticism of the protesters, calling them "radicals and anarchists."

Meanwhile, Seattle Mayor Jenny Durkan said Tuesday that she had received confirmation that U.S. agents had left her city after being sent to Seattle last week to protect federal buildings amid lingering unrest.

The developments came as the American Civil Liberties Union in Oregon filed a motion alleging that the militarized U.S. agents are attacking journalists and legal observers with riot-control munitions, despite a federal court ordering them to stop.

Last week, the U.S. District Court in Portland - located in the same federal court building that's been the focus of protests - temporarily blocked federal officers from targeting journalists and legal observers at the protests.

The ACLU asked the court to sanction and hold in contempt federal agents for violating the temporary restraining order. It also asked the court to order Acting Homeland Security Secretary Chad Wolf and Acting Deputy Secretary Ken Cuccinelli to personally appear and show why they should not be sanctioned for contempt.

The organization cited numerous instances in which agents have allegedly violated the order by firing impact munitions and using pepper spray against people clearly marked as journalists or legal observers.

The ACLU accused federal agents of acting unlawfully in Portland.

"This administration claims to be defending the federal courthouse, but won't obey the orders coming out of it. What purpose are these agents actually serving then?" said Kelly Simon, interim legal director of the ACLU of Oregon.

One journalist, Jonathan Levinson of Oregon Public Broadcasting, said in a statement to the court that while he was trying to take a photograph Friday, he saw a federal agent raise his weapon, aim it at him and fire several rounds.

"My camera and lens were splattered with paint," Levinson said. "Based on my position and the position of people around me, there is almost no chance the agent was aiming at anyone other than me."

Levinson, who has covered conflicts worldwide and was deployed to Iraq as an Army officer, said he was wearing a press pass and a helmet that says "PRESS" in big letters on the front and back.

Kat Mahoney, a legal observer with the ACLU, said a federal agent fired a paintball at her, hitting her in the head Friday. The next night, an agent sprayed her and three other observers in the face as they told him they were legal observers and pointed to their credentials.

There was no immediate comment from the federal agencies on the motion and accusations.

Two groups also have sued the Department of Homeland Security, alleging it violated the Constitution by sending federal law enforcement to disperse crowds with tear gas and rubber bullets.

The agency did not immediately respond to a request for comment about the lawsuit from the Wall of Moms - a group of self-described mothers - and the Don't Shoot Portland group.

Members of the group of mothers have "been tear-gassed night after night, left vomiting and unable to eat or sleep because of the toxic poison blasted at them," the lawsuit said.

Protesters have tried almost every night to tear down a fence erected to protect the building, set fires in the street and hurled fireworks, Molotov cocktails and bricks, rocks and bottles at the agents inside. Authorities this week reinforced the fence by putting concrete highway barriers around it.