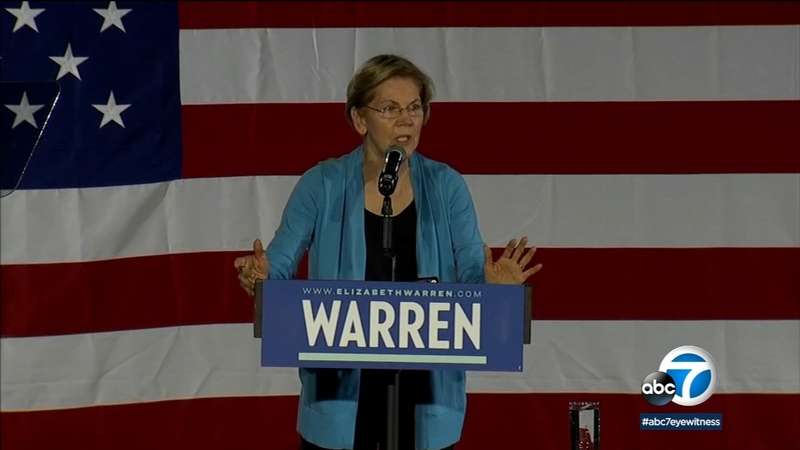 Warren is scheduled to speak around 7:30 p.m. recognizing the Justice for Janitors movement, which seeks better wages and working conditions, improved health care, and full-time opportunities for janitors through union representation.

Jennifer Siebel Newsom, the wife of Gov. Gavin Newsom, and Angelica Salas, the executive director of the Coalition for Humane Immigrant Rights, will provide introductory remarks, according to the Warren campaign.

Siebel Newsom announced her endorsement of Warren for the Democratic presidential nomination on Friday, saying "there is no person better equipped to fight for us than Elizabeth."

Doors for Monday's event on the campus' front quad open at 5:30 p.m. Admission is free and will be on a first-come, first-served basis.

Former Vice President Joe Biden was planning on holding an event in Los Angeles Tuesday, though details have not been disclosed.

Vermont Sen. Bernie Sanders held a rally Sunday at the Convention Center in downtown Los Angeles in front of thousands of supporters ahead of California's primary.

Sanders has made winning California central to his campaign. In his final visit to L.A. before the primary Tuesday, he spoke to more than 15,000 at the Convention Center. Sanders urged his supporters to vote, not by attacking his rivals, but by attacking President Donald Trump.

"No, we will not have a pathological liar in the White House for four more years," Sanders told his supporters. "We will not have a president who is undermining American democracy, who believes he is above the law."