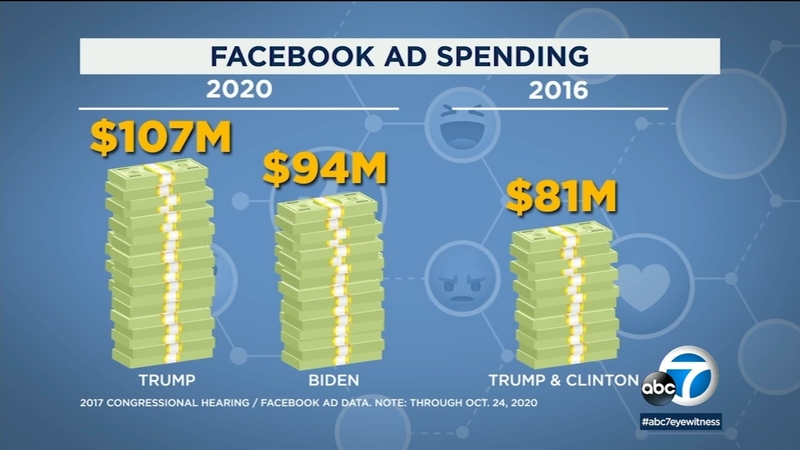 Both candidates have used a flurry of political ads throughout their campaigns to reach voters directly on platforms like Facebook.

Between January 2019 and Oct, 24, 2020, Eyewitness News found both candidates had spent more individually on Facebook ads than Trump and former Secretary of State Hillary Clinton spent combined during the 2016 election.

By contrast in 2016, both candidates spent $81 million collectively, according to statements from Facebook General Counsel Colin Stretch during a 2017 U.S. House Intelligence Committee hearing.

"No one in the digital world is surprised to see increasing focus going to digital ads," said USC Annenberg Digital Social Media Professor Karen North. "Unlike traditional media, digital allows you to target audiences directly. The real, huge change with social media versus traditional media is that it makes us feel like we have a personal connection with somebody."

The ads from candidates are sponsored and can populate in Facebook users' feeds much like a post from a friend. Digital advertising also allows political campaigns to specifically pick who to target and write messages that directly speak to that audience, North says.

The 2020 Campaign Tracker from Bully Pulpit Interactive, a communications company, analyzed what type of voter each candidate has been targeting in social media ads.

By contrast, the tracker showed Trump had slightly favored male voters, targeting men 49.8% of the time and had also targeted older voters, people 45 years old and older about 67.4% of the time.

North said social media advertising allows candidates to know exactly what kind of voter they are reaching and craft messages specific to their interests, leaving voters more vulnerable to persuasion.

"People unfortunately don't realize how vulnerable they are to being manipulated," North said. "It's very hard to think about a time when we come back to people hear the news, think about the news, and talk to people, instead of finding out about the news from someone who is an opinion leader first. And so if that is our future, we need to educate people that the news you are reading may be an opinion and not news."