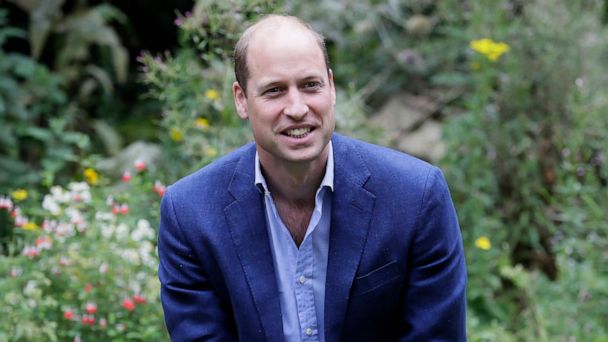 As Prince William prepares to deliver his Earthshot Prize to people saving the planet, he aimed some criticism at billionaires sending people to space.

"We need some of the world's greatest brains and minds fixed on trying to repair this planet, not trying to find the next place to go and live," William, 39, said in a new BBC interview, referring to the current race for space tourism led by billionaires Jeff Bezos, Elon Musk and Richard Branson. "I think that ultimately is what sold it for me -- that really is quite crucial to be focusing on this [planet] rather than giving up and heading out into space to try and think of solutions for the future."

"Everybody in the world needs to do this," Shatner told Blue Origin founder Jeff Bezos after he touched down in Texas Wednesday.

William said he has "absolutely no interest" in going to space and questioned the carbon cost of flights to space, according to the BBC.

On Sunday, William and his wife, Kate, the Duchess of Cambridge, will attend the first Earthshot Awards, where five winners working to repair the planet will receive $1 million in funding.

Five winners will each receive $1 million each year until 2030. The goal is to create "at least 50 solutions to the world's greatest environmental problems by 2030," Kensington Palace said about William's $50 million initiative.


William and Kate are the parents of three children, Princes George and Louis and Princess Charlotte.

William spoke to the BBC about how his kids motivate his work on the environment.

"I want the things that I've enjoyed - the outdoor life, nature, the environment - I want that to be there for my children, and not just my children but everyone else's children," he said. "If we're not careful we're robbing from our children's future through what we do now."

William also described his fear that Prince George, 8, the third in line to the throne, may still be talking about climate change 30 years from now, when it "will be too late."

"It shouldn't be that there's a third generation now coming along having to ramp it up even more," said William, whose father, Prince Charles, has made addressing climate change a priority of his work. "And you know, for me, it would be an absolute disaster if George is sat here talking to you or your successor, Adam [Fleming, of the BBC], you know in like 30 years' time, whatever, still saying the same thing, because by then we will be too late."
Report a correction or typo
Related topics:
abc newsnational
Copyright © 2021 ABC News Internet Ventures.
TOP STORIES
TX mother, boyfriend arrested in case of 8-year-old's decomposing body
LA creates basic-income program to help 3,000 families
Family of man killed by Tustin police wants officer behind bars
Kobe crash photo lawsuit: Sheriff, fire chief ordered to testify
LA, Long Beach ports to fine companies for lingering containers
Violent brawl breaks out at Miami dog show
All migrant children at Pomona shelter reunited with family, sponsors
Show More
Pandemic drinking leads to spike in liver transplants
Political comedian Mort Sahl dies at 94
Los Angeles city employees have until Dec. 18 to get vaccinated
Investigators identify people found dead inside home on Balboa Island
LAPD investigating alleged sexual assault of student at Hamilton High
More TOP STORIES News