Headlines from protests in Rochester, Portland and at the Kentucky Derby
AP 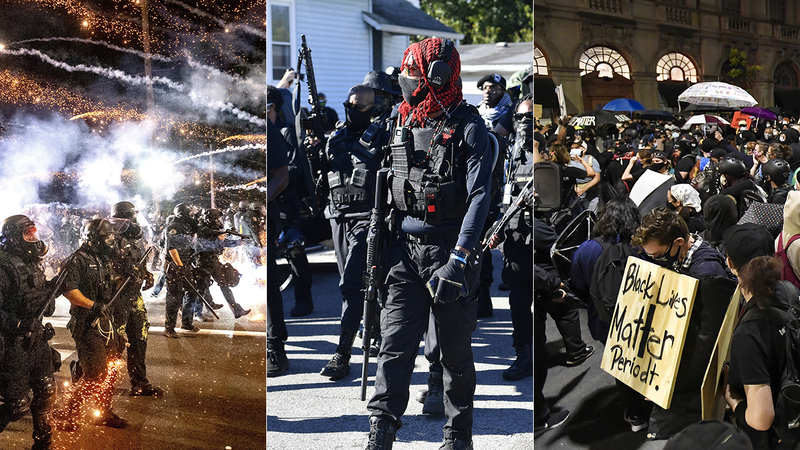 Memorial Day brought the death of George Floyd at the hands of Minneapolis police, prompting hundreds of thousands of Americans to take to the streets in protest. President Donald Trump called Floyd's death a "disgrace" and momentum built around policing reform.

But by Labor Day, the prospects for federal legislation have evaporated. And Trump is seeking to leverage the violence that has erupted around some of the protests to scare white, suburban voters and encourage them to back his reelection campaign.

The three-month stretch between the symbolic kickoff and close of America's summer has both galvanized broad public support for the racial justice movement and exposed the obstacles to turning that support into concrete political and policy changes. It has also clarified the choice for voters in the presidential race between Trump, who rarely mentions Floyd or other Black Americans killed by police anymore, and Democrat Joe Biden, who argues that the summer of protests can become a catalyst for tackling systemic racism.

Polls show Biden has an advantage among Americans when it comes to which candidate can manage the country better through the protests. An ABC News/Ipsos poll out Friday showed that 55% of Americans believe Trump is aggravating the situation. When it comes to reducing violence, Americans favor Biden to Trump, 59% to 39%.

Here are the latest headlines on protests and race in America this weekend:

Protesters filled the streets of Louisville on the day of the Kentucky Derby.

This year's Kentucky Derby is a surreal distillation of the crises facing the country in 2020. Inside the racetrack Saturday, the stands were mostly empty and wagering windows closed as fans were banned because of the coronavirus pandemic.

Outside, thousands of protesters leaned into the gates, chanting the name of Breonna Taylor. Taylor was a Black emergency medical technician who was shot dead in her home in March when police burst in to serve a search warrant.

As the horses rounded the track, the protesters shouted and stomped, trying to make enough noise so that no one inside could ignore them.

The protests were peaceful. The demonstrators marched 2 miles from a city park and circled the track. They chanted "No justice, no Derby!" and carried signs imploring people to say Taylor's name. Inside the gate, police stood guard in riot gear with clubs, some on horses and some with armored military vehicles.

The investigation into Taylor's March killing is ongoing and no charges have been filed.

"What are we celebrating?" one of the organizers, Brittany Wiley, told the crowd. "We don't want mint juleps. We want justice. We're not partying. We're protesting. No justice? No Derby." 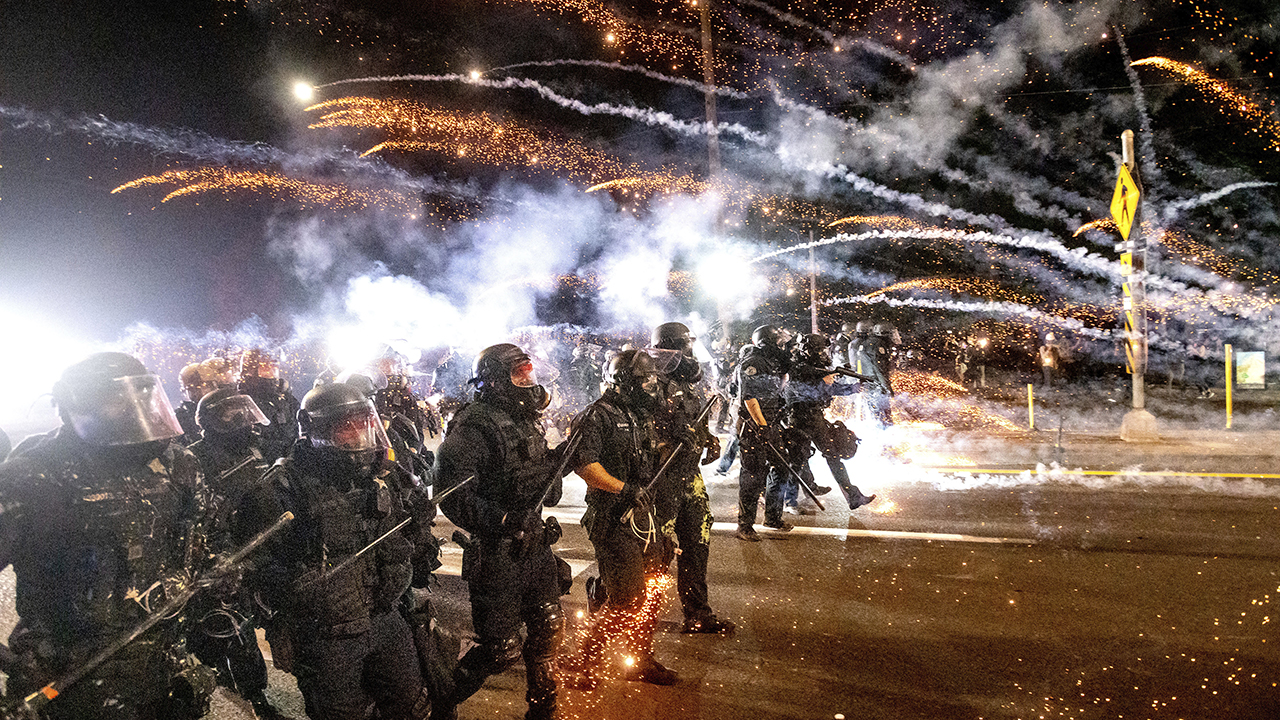 Police use chemical irritants and crowd control munitions to disperse protesters during a demonstration in Portland, Ore., Saturday, Sept. 5, 2020.

Hundreds of people gathered for rallies and marches against police violence and racial injustice Saturday night in Portland, Oregon, as often violent nightly demonstrations that have happened for 100 days since George Floyd was killed showed no signs of ceasing.

Molotov cocktails thrown in the street during a march sparked a large fire and prompted police to declare a riot. Video posted online appeared to show tear gas being deployed to clear protesters from what police said was an unpermitted demonstration. Arrests were made, but it wasn't immediately clear how many.

At least one community member was injured, police said. A person's shoes caught fire after flames broke out in the street, video showed. People were "engaging in tumultuous and violent conduct thereby intentionally or recklessly creating a grave risk of causing public alarm," the department tweeted. "Fire bombs were thrown at officers."

Protesters, most wearing black, had gathered around sunset Saturday at a grassy park in the city. Wooden shields were placed on the grass for protesters to use as protection.

Demonstrations in Portland started in late May after the police killing of Floyd in Minneapolis. During the clashes, some have broken windows, set small fires and pelted police with rocks and other objects.

On the 100th day of protests in Portland, demonstrators vowed to keep coming into the streets.

Tupac Leahy, a 23-year-old Black man from Portland, said he had probably been out to protests for about 70 of the 100 days of demonstrations.

Leahy said he wanted to see a significant reduction to the local police budget, with the money directed to other community needs. He said the demonstrations would continue for some time.

"I think it's going to keep going on until the election," Leahy said. "I don't see it slowing down." 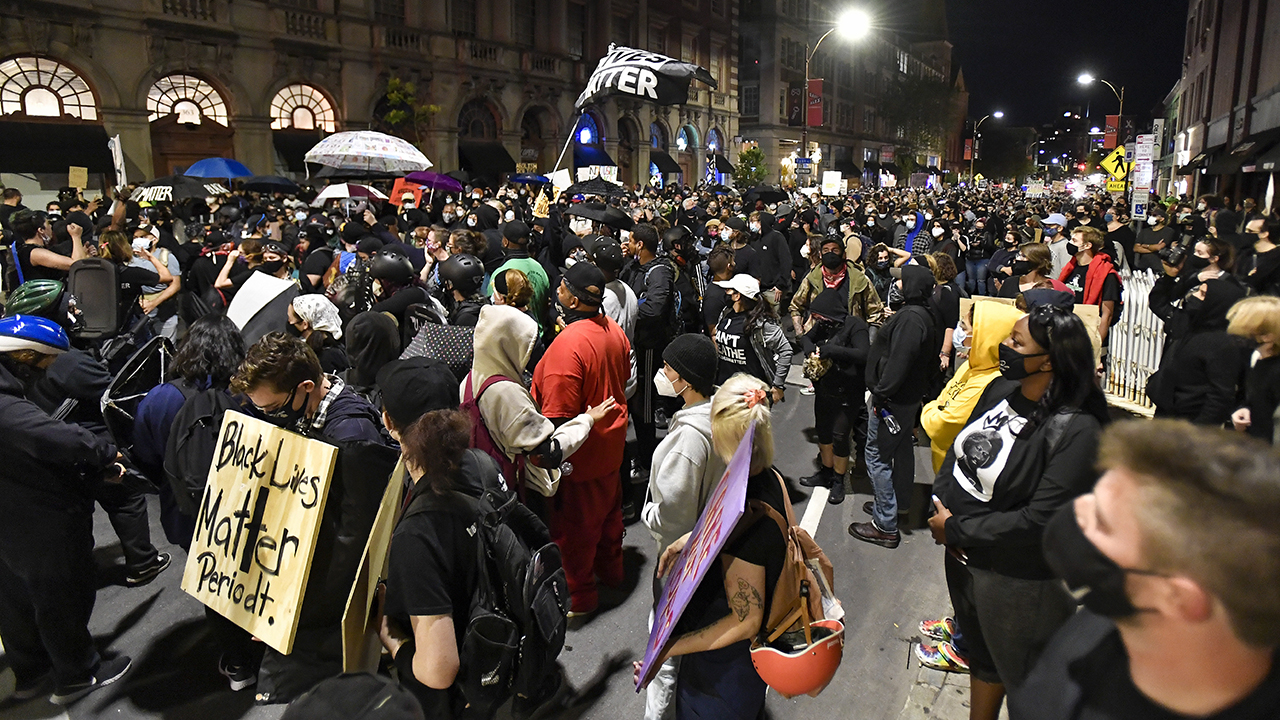 Demonstrators march through the streets in Rochester, N.Y., Friday, Sept. 4, 2020, protesting the death of Daniel Prude.

Nine protesters were arrested in Rochester as demonstrations over the death of a Black man who lost consciousness after police held a hood over his head continued for a fourth night.

Three officers were treated at hospitals for injuries they suffered when "projectiles and incendiary devices" were hurled at them during Saturday night's protests over the death of Daniel Prude earlier this year, Lt. Greg Bello of the Rochester police said in a news release.

The Democrat and Chronicle reported that some protesters were hit by projectiles as well as thousands marched through the streets of New York's third-largest city. No information about injuries to protesters was provided by police.

"The Prude family and the Rochester community have been through great pain and anguish," Attorney General Letitia James said in a statement Saturday. She said the grand jury would be part of an "exhaustive investigation."

A police internal affairs investigation cleared the officers involved of any wrongdoing, concluding in April that their "actions and conduct displayed when dealing with Prude appear to be appropriate and consistent with their training." The seven officers were suspended Thursday after Prude's family released the video from the scene.

Jacob Blake speaks out for first time since police shooting

In a brief video posted Saturday night on Twitter by his family's lawyer, Ben Crump, Blake says from his hospital bed that he's in constant pain from the shooting.

Jacob Blake has spoken publicly for the first time since a Kenosha, Wisconsin, police officer shot him seven times in the back.

In a brief video posted Saturday night on Twitter by his family's lawyer, Ben Crump, Blake says from his hospital bed that he's in constant pain from the shooting, which doctors fear will leave him paralyzed from the waist down. He says, "Twenty-four hours, every 24 hours it's pain, nothing but pain. It hurts to breathe, it hurts to sleep, it hurts to move from side-to-side, it hurts to eat."