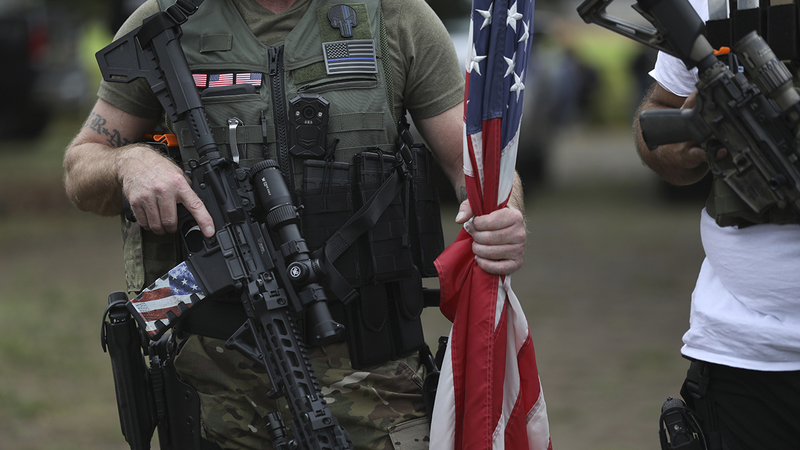 Who are the Proud Boys?

Members of the far-right group the Proud Boys are celebrating comments made by President Donald Trump after he was asked to condemn White supremacists, and refused to do so, during Tuesday's presidential debate.

The president instead used his allotted time to blame what he called "antifa and the left" for violence and to tell the Proud Boys to "stand back and stand by."

Shortly after Trump's answer, his words were embraced in memes and other social media posts by accounts that purported to be from Proud Boys members.

Some emblazoned the phrase "stand back and stand by" onto the group's logos. Others treated the President's choice of the words "stand by" as a sort of rallying cry -- and have since been promoting it. Now, they're turning it into profit by selling merchandise with the comment on it.

President Donald Trump has sidestepped a question from moderator Chris Wallace about whether he was willing to condemn white supremacists and military groups.

CNN's Elle Reeve spoke with Enrique Tarrio, the group's leader, who said while he was happy about the President's comments, he doesn't see it as an endorsement.

Tarrio said he interpreted "stand back and stand by" as meaning they should just keep doing what they're doing.

Although it claims a diverse membership -- Tarrio says he is Cuban American -- the Proud Boys group lists among its central tenets a belief in "closed borders" and the aim of "reinstating a spirit of Western chauvinism."

In online statements, Proud Boys have claimed they have only used violence in self-defense. But members are often seen carrying firearms, bats and donning protective gear, and some have been convicted of crimes against anti-fascist protesters.

The group's ideology has been labeled "misogynistic, Islamophobic, transphobic, and anti-immigration" by the Anti-Defamation League.

Their supporters have been seen at recent protests across the US, including in Portland.

Tuesday's debate also provided another example of Trump dodging and deflecting an opportunity to condemn White supremacist groups within the United States.

The day after the debate, Trump claimed he had no idea who the Proud Boys were. He also, again, refused to explicitly condemn White supremacists before repeating his call for his Democratic rival Joe Biden to denounce Antifa.

It also provided further fuel for Biden's claims that the President has emboldened right-wing extremist groups since the 2017 "Unite the Right" rally in Charlottesville, Virginia, in which a neo-Nazi drove his car into a crowd of counterprotesters, killing one woman.

Biden has frequently cited Trump's response to that as motivating him to run for the presidency.

In response to the violence, the President said at the time that there were "very fine people on both sides" of the protests, which included White supremacists.

Who are the Proud Boys?

The group was created by Gavin McInnes, a co-founder of Vice, in 2016, according to a Proud Boys website.

Before he quit the group in late 2018, McInnes said in a speech that the Proud Boys weren't going to pick fights, "but if they pick fights with us, we're going to finish them."

The Anti-Defamation League, citing videos posted to social media from McInnes' radio show, says he has previously posted videos of himself giving the Nazi salute, saying, "Heil Hitler," defending Holocaust deniers and repeatedly using racial and anti-Semitic slurs. They say despite the videos, McInnes has refuted claims that he is anti-Semitic and racist.

CNN has reached out to McInnes' lawyer about the videos but has not yet received a response.

"We're a drinking club with a patriot problem," Tarrio, the group's current leader, told CNN. "As Proud Boys, I think our main objective is to defend the West," he said.

"If our mere presence causes people to want to commit acts of violence, we're not afraid to defend ourselves," Tarrio said.

On one of its websites, the group calls itself "men who refuse to apologize for creating the modern world."

In 2019, two members of the Proud Boys were convicted on assault charges, including attempted gang assault, for attacking anti-fascist protesters.

Some members of the group appear to have connections to the President's longtime friend and political adviser Roger Stone, according to Stone's testimony for his 2019 criminal case related to the Russia investigation. During that trial, Stone testified that some Proud Boys members helped run his social media accounts.

On July 8, Facebook removed Stone's Instagram and a network of pages linked to him on its platforms because they were linked to the Proud Boys, which have been banned from the social media platform under its hate policies.

What the President said during debate

The President had been asked by the moderator Chris Wallace if he would condemn White supremacists and militia groups.

After the initial question, Wallace and Biden both prodded him to condemn White supremacy and Trump appeared to deflect and dodge that, saying "almost everything" of the violence he's seen has been from "Antifa and the left."

Biden then mentioned the Proud Boys, which Trump seized on.

"Proud Boys, stand back and stand by," he said. "Somebody has to do something about Antifa and the left because this is not a right-wing problem, this is a left-wing."