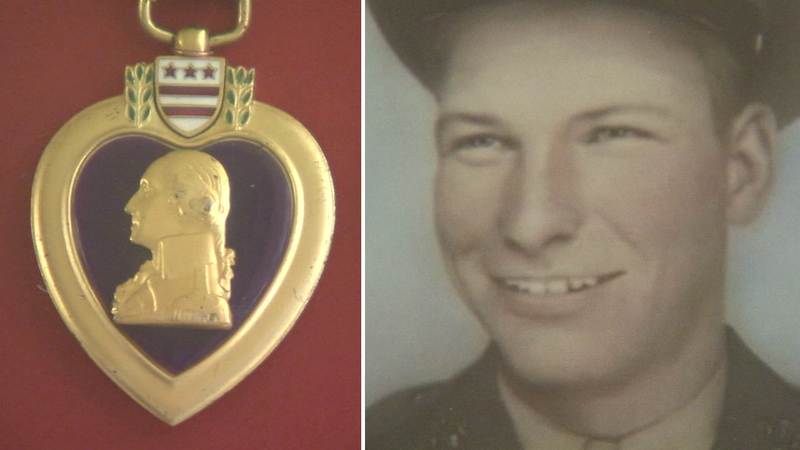 LAKE ELSINORE, Calif. (KABC) -- An emotional reuniting took place in Southern California on Friday as the Purple Heart of a fallen Marine was returned to his family.

Marine Pfc. Nolan McKinney was just 18-years-old when he died during the Battle of Guadalcanal on Nov. 22, 1942.

Somewhere along the way, the Purple Heart and other service medals given to McKinney's family were lost. Two months ago, they turned up at a Goodwill store in New Mexico and found their way to Purple Hearts Reunited in Vermont.

"We're able to do the research by the name engraved on the back of the medal and trace the nephew down here in California," Zachariah Fike with Purple Hearts Reunited explained.

McKinney's nephew Rocky Snider accepted the medal on behalf of his family. Snider said his mother hung her brother's picture in her home until her own death.

"It is emotional," Snider said. "There is a deep family attachment there that we feel."

Mckinney's body was never located and Snider also learned on Friday that he could help find his uncle's remains one day by providing a cheek swab of his DNA.

"It was a long shot that 70 years later that we got the medal, would it be that much of a long shot to find that his DNA is in the system somewhere?" Snider questioned.

The non-profit helps find lost or stolen military decorations of valor and attempts to return them to families. Purple Hearts Reunited is currently trying to return more than 400 medals.

"These medals symbolize so much. They symbolize a soldier who either shed their blood or sacrificed their lives for us," Fike said.