Census data shows a lack of racial diversity in the appraiser industry at the local, state and national level.
KABC
By Rob Hayes and Grace Manthey 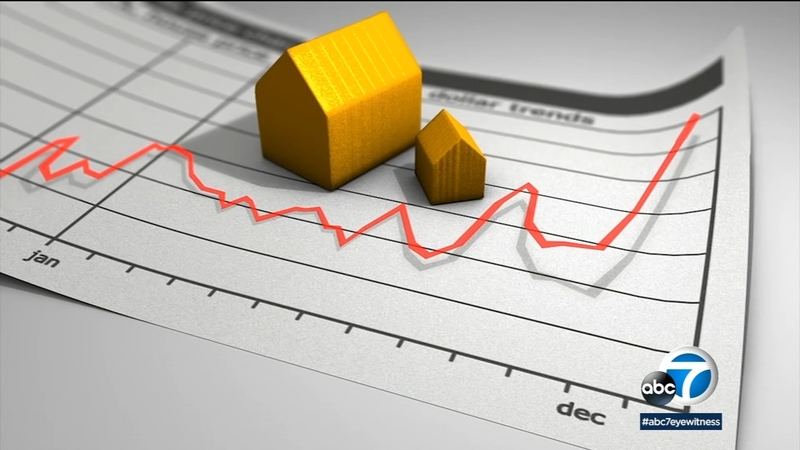 LOS ANGELES (KABC) -- As a mortgage broker who works with many low to moderate-income families, Mark Alston is familiar with problems in the real estate appraisal industry.

"We hold our breath while we wait for the appraisals to come," said Alston, the owner of Alston and Associates Mortgage Company and the public affairs committee chair of the National Association of Real Estate Brokers.

An appraisal, a valuation of a home or property, can give many families the opportunity to refinance, send kids to college, start a business or retire, Alston explained.

"When you undervalue a property, it's detrimental. It has a devastating impact to a community," he said.

Racial bias has contributed to a widespread undervaluing of homes nationwide, particularly those of Black and Latino homeowners, according to a federally-commissioned report by the National Fair Housing Alliance released this week.

"It's a very exhaustive report. We were, quite frankly, surprised by some of the findings. We didn't expect to uncover some of the issues that we uncovered," said Lisa Rice, the CEO of the National Fair Housing Alliance.

The non-profit's report detailed multiple studies looking at racial bias in appraisals. They found appraisal gaps, when properties receive an appraisal value lower than the contract price, are found more often in Black and Latino neighborhoods. Another study found home value gaps have widened since 1980.

Additionally, studies found that properties in Black neighborhoods were appraised lower than similar homes in other neighborhoods, and that thousands of appraisal reports contained potential race-related flags.

"What our study shows is that these issues are not one-offs, that there are some really deep structural issues and barriers that no one individual, no one homeowner could overcome," Rice said.

Experts said part of the reason for the bias is due to the lack of diversity in the appraiser industry.

"Most of the time we get appraisers from outside of the neighborhoods that they are appraising in. Appraising in an area that they're sometimes scared to be in," said Alston.

In the Los Angeles metro area, which encompasses Los Angeles County and Orange County, survey data from the U.S. Census Bureau estimates that about two-thirds of appraisers are white, despite the white population making up only about a third of the total population.

Only 14% of appraisers are Latino and 2% are Black. These groups make up about 45% and 6% of the population of the area, respectively. 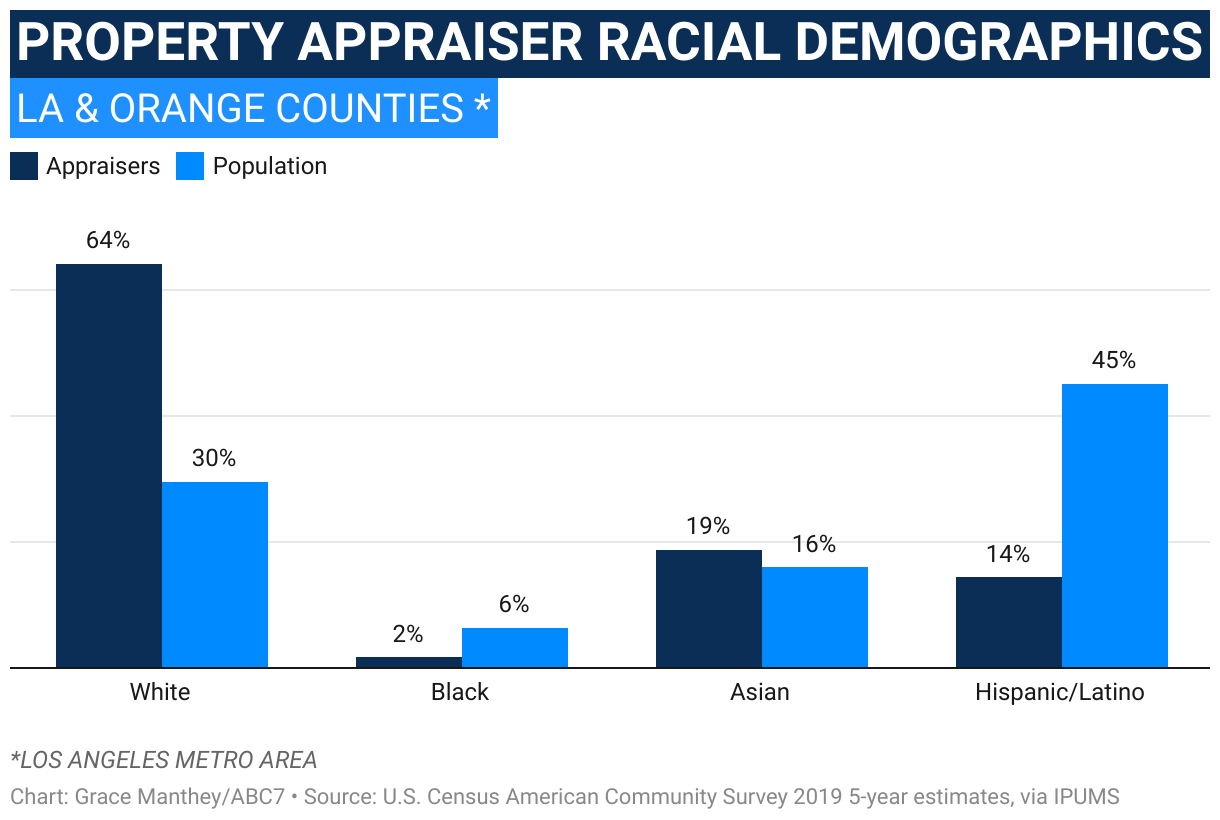 Similar patterns can be seen in the Inland Empire. 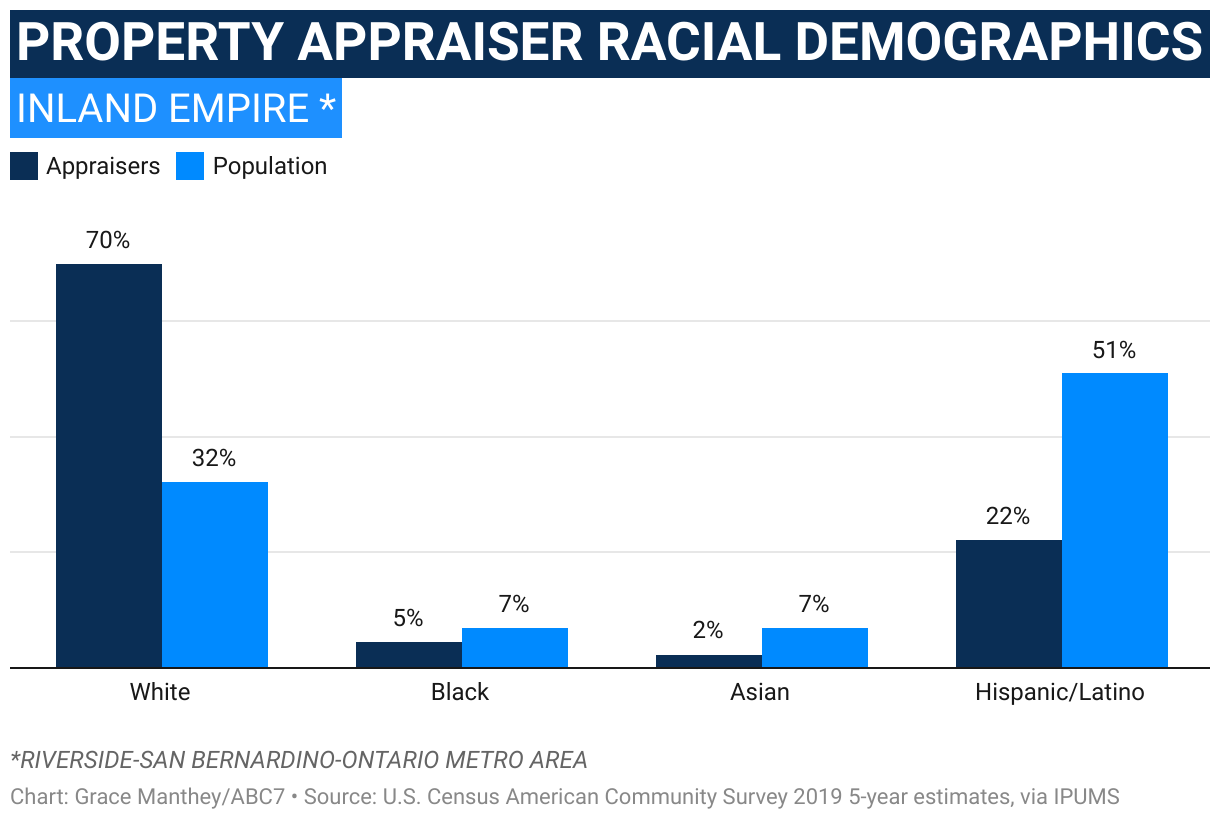 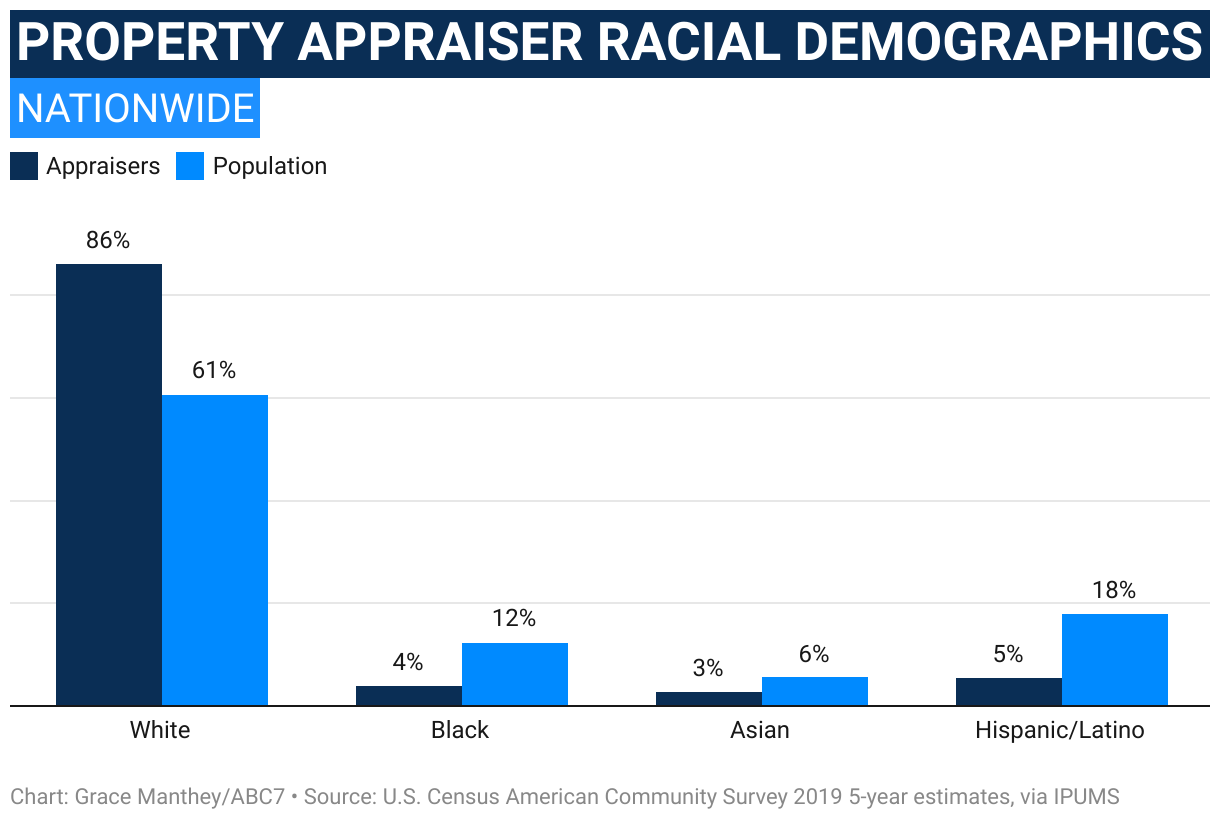 Other federal agencies who study occupation data suggest the lack of diversity could be even more severe. For instance, using different methods, the Bureau of Labor Statistics estimates the percentage of white appraisers nationwide may be as high as 96%.

"We need diversity and access across the board, because the reality is, being Black, I can't fix the problem by myself. It's going to take all of us," Alston said.

According to the National Fair Housing Alliance, there are barriers to enter the industry that contribute to its lack of diversity.

"If you want to become an appraiser, you have to find somebody who's already licensed and certified...in order to take you under their wings, sort of like an apprentice," said Rice, the CEO of the NFHA.

The organization is recommending ways to remove some of those barriers like streamlining the credentialing process, reviewing degree requirements, expanding outreach and monitoring the demographics of those entering the profession.

"When you look at the fact that the industry is already overwhelmingly white male, just think about the opportunities there are going to be for young people of color," said Rice.

In a written statement, the Appraisal Institute President, Jody Bishop said the institute agrees with the report acknowledging that, "enhanced standards and greater diversity within the profession are critical elements in addressing equity and rooting out bias in appraisal."

"That's why since 2018, the Appraisal Institute has worked to recruit and expand opportunities for appraisers of color and women through the Appraiser Diversity Initiative, raised ethical standards for our membership, convened researchers and experts, worked closely with congressional leaders, and advanced legislation to require education on anti-discrimination and fair housing. There is more to do, and these efforts remain core to our work as an organization" the statement continued.

Mark Alston said the report will be an "invaluable tool in trying to offset the damage done by the wealth stripping activity of undervalued appraisals in communities of color and especially in Black neighborhoods."

He said it validated what he has dealt with in his 32 years in the real estate business.

"How do we go back and find a way of redress that corrects the appraisal bias situation that we have for undervalued neighborhoods around the country? How do we fix that?" Alston asked.