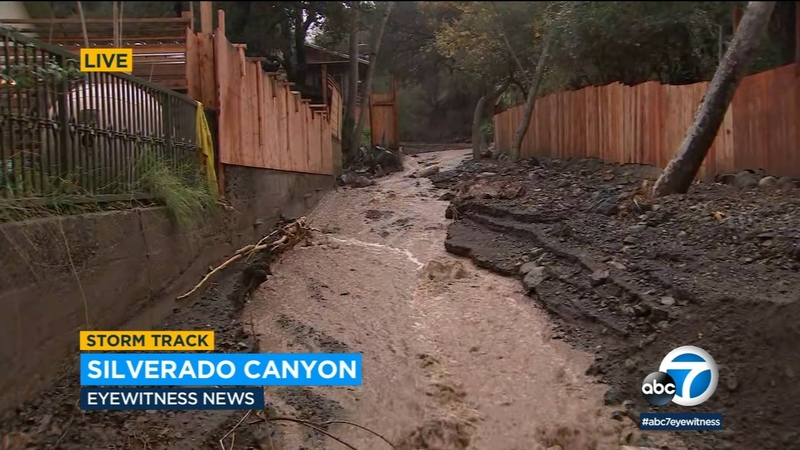 The county activated its Emergency Operations Center Thursday morning to help expedite the response to any flooding or debris flows.

Some streets in the area are now restricted to local traffic only. You can find a map with details of the areas under mandatory evacuation on the Orange County Sheriff's Department's website.

Evacuating residents who have COVID-19 or COVID-like symptoms are asked to call 714-628-7085 for further screening before arrival at the shelter.

A mandatory evacuation order will take effect at 8 p.m. on Thursday in the Silverado, Williams and Modjeska canyons in Orange County's Bond Fire burn area as heavy rain is expected to move through Southern California Thursday.

The National Weather Service issued a flood watch that will be in effect until Friday morning for coastal and inland Orange County. Forecasters said some mountain areas could receive 3 to 6 inches of rain from the "atmospheric river," with the heaviest downpours expected after midnight through Friday morning.

The rain will persist intermittently -- perhaps heavy at times -- through the holiday weekend, according to the National Weather Service.

"Unsettled weather will prevail across the area with periods of rain through Sunday morning, heaviest Thursday into early Friday," according to the weather service.

Residents in Silverado Canyon had been preparing for the possibility of mudslides and debris flows by stacking sandbags and other barriers.

As of Friday morning, no major mudslides were reported, but crews say some mud and water started taking over a stretch of road near Silverado Canyon Road and Olive Drive. Some of it made its way inside a home that was affected by last week's rain, but nobody was inside.

Meanwhile in the mountains, Caltrans reported multiple rock slides from the storm on Highway 18 between Snow Valley and Big Bear Dam. Part of the road was closed Friday morning after a CHP car was hit by one of the rock slides. Nobody was injured.

Crews advising using Highway 38 as an alternate route - or wait until the storm is over to travel there.