Rams give back to community by auctioning items

The Los Angeles Rams launched an auction site where all of the proceeds go to the support of the teams' community outreach programs, and quarterback Jared Goff is matching sales of his merchandise to directly benefit the Inglewood Unified School District.
KABC
By Ashley Mackey 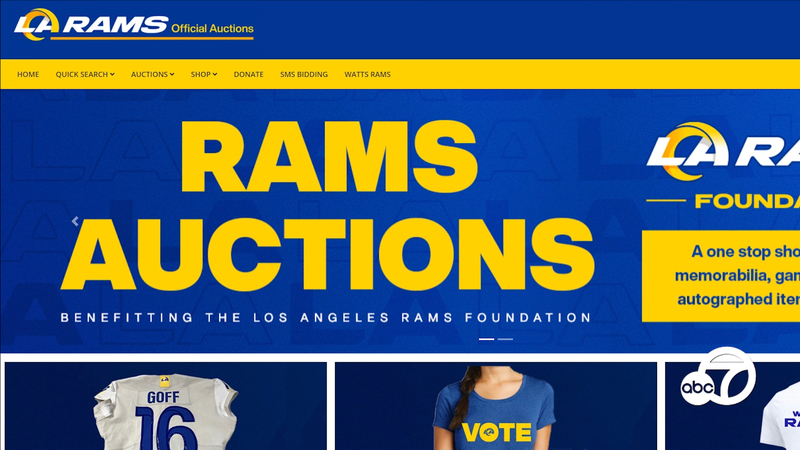 Rams give back to community by auctioning items

INGLEWOOD, Calif. (KABC) -- Even though fans can't enjoy games in person this season, the Los Angeles Rams are coming up with other ways to get fans involved.

Last month they launched their official auction site where people can bid on memorabilia, gear worn in games, autographed items and more.

The Los Angeles Rams manager of community affairs and player involvement, Zach Kinkeade said the project had been a developing idea.

"Rams auctions has been an idea that we've thrown around for the past few years, but I think it was the right time to pull the trigger this year, just with COVID," Kinkeade said. "We wanted to be able to still kind of interact with fans."

The auction site will work much like a regular auction just online, similar to eBay. Fans can submit their bids on the website and 100 percent of the proceeds will go to the Los Angeles Rams Foundation in support of the teams' community outreach programs.

"The whole goal of this auction site was to help put the money back in the community," Kinkeade said. "So it's really our one stop shop for random memorabilia, used gear, with 100 perccent of proceeds going back to fund our initiatives."

The auction site will also feature products from quarterback Jared Goff's apparel company JG16, and Goff announced he will match the sales of the JG16 merchandise which will directly benefit the Inglewood Unified School District.

"I want to do more than just show up to work at SoFi stadium on Sundays," Goff said. "It is important to me to have a greater impact beyond football in the Inglewood community and uplift the city's youth by doing my part to create change and make difference at the foundation."

"He's really demonstrated great leadership as a valuable member of our community and our district," said Inglewood Unified School District County Administrator Erika Torres. "We're so fortunate for the opportunity to work directly with him and the entire Rams organization."

To bid on some of the items and help support the Los Angeles Rams Foundation and their initiatives visit their website.