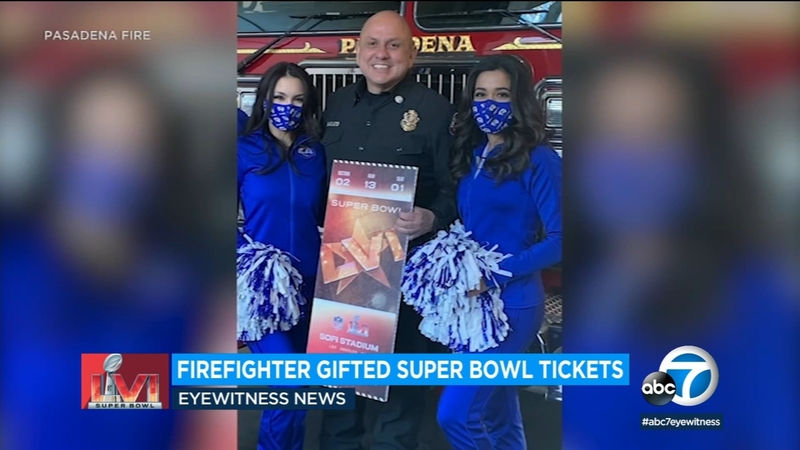 PASADENA, Calif. (KABC) -- A Pasadena Fire Department captain has been awarded tickets to this year's Super Bowl, a gesture by the Rams organization in recognition of the first responder's off-duty heroism during a recent fire.

Capt. William Basulto and his father were on their way to the NFC title game on Jan. 30 when Basulto's father noticed smoke emanating from his neighbor's East Los Angeles home.

"It gets a little bigger and I go, 'Hey dad, I'm going to check it out,'" Basulto recalled. "Because we didn't hear any sirens at that point. We came and were able to help the people out."

The Rams organization learned of Basulto's heroism and have made accommodations for him, his family and his two neighbors to attend Sunday's Super Bowl game at SoFi Stadium in Inglewood.

In an interview with ABC7, Samantha Gonzalez said she rushed home when she found out their house was on fire.

"Just seeing my mother covered in ash and her entire body in the ambulance," Gonzalez said, "and me not being able to go with her in the ambulance was just so emotional, feeling so powerless."

A die-hard Rams fan who survived cancer is getting a chance to watch his team possibly beat the Cincinnati Bengals in the Super Bowl this weekend.

Gonzalez's mother has since been released from the hospital. After the Super Bowl game is over, Gonzalez said that in the long term she hopes her mother will continue to make progress in recovering from her injuries.

The family has set up a GoFundMe account to help pay for mounting medical bills and to repair their home. A donation drive is scheduled to be held Saturday from 10 a.m. to 4 p.m. at Ramona Convent Secondary School, located at 1701 West Ramona Road in Alhambra.

Those involved in the incident said they are grateful for the Rams' Super Bowl invitation. Gonzalez said she's especially grateful for Basulto's efforts.

"I think he's an absolute hero," she said. "Every day I can't stop thanking him for being there and saving my mom's life."

"We appreciate Microsoft and the Rams giving us tickets," Basulto said, "but for Samantha's mom to be better, and coming out of the hospital after a few days, is amazing."