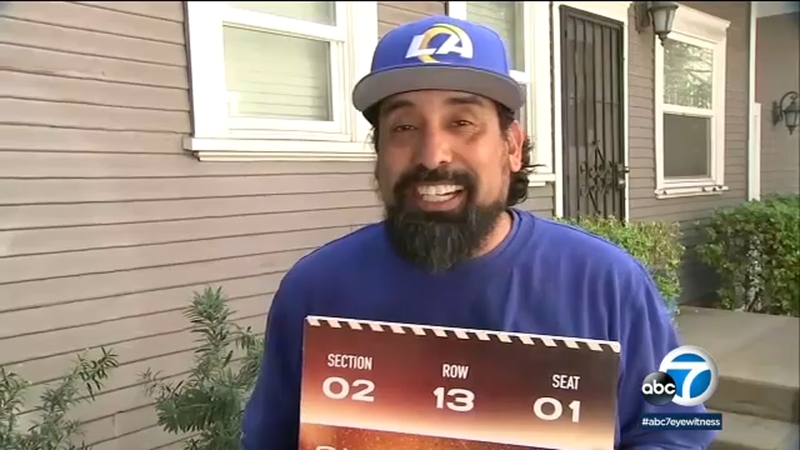 WEST COVINA, Calif. (KABC) -- A die-hard Rams fan who survived cancer is getting a chance to watch his team possibly beat the Cincinnati Bengals in the Super Bowl this weekend.

Donald Jimenez was overcome with excitement as it sank in that he would get to see his favorite team play for the title in person - thanks to former Rams player Chris Draft.

"He came out and knocked on my door ... It was just amazing. Words can't describe how I feel right now," Jimenez said.

He says it was team spirit that got him through his darkest days, especially his battle with colon cancer.

"I heard that there's this super fan... I saw the feature and had to come over and meet his man," Draft said, referring to ABC7's initial story on Jimenez.

Even in his darkest days, Donald Villa said the Rams helped him push through. On his last day of chemotherapy, he even left the hospital in full Rams gear.

On his last day of chemotherapy, Jimenez left the hospital in Rams gear. It's that kind of loyalty that prompted his stepdaughter, Alissa Villa, to start a GoFundMe to help her stepfather go to the Super Bowl at SoFi Stadium this weekend.

When the Rams heard about his dedication, they knew that Jimenez had to be in the stands cheering on the team.

"Dream of a lifetime, it's going to be amazing. I really can't wait...I don't even know how I'm going to feel when I'm walking into that stadium on Sunday."

Jimenez and his family are now paying it back themselves and donating all of the money raised through the GoFundMe account to the Colorectal Cancer Alliance.

He's now focusing all of his energy and excitement on his favorite team taking home the treasured trophy.