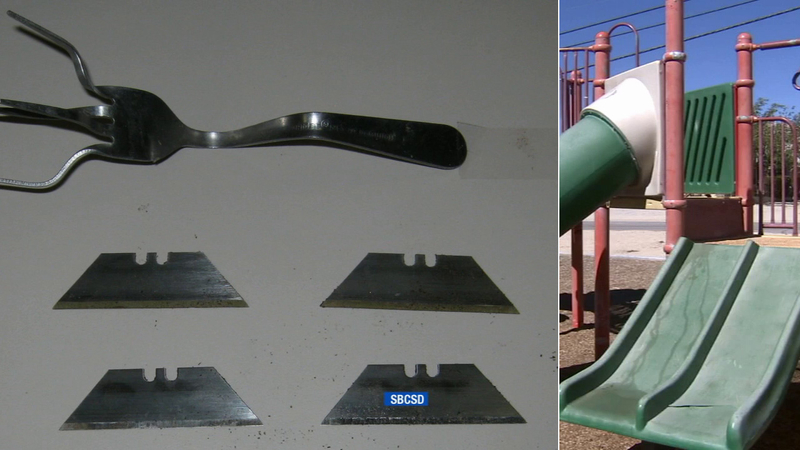 ORO GRANDE, SAN BERNARDINO COUNTY (KABC) -- Oro Grande Park was fairly quiet Wednesday afternoon. Perhaps because it was a school day, but it might also have been empty because of what was discovered there the day before.

Several sharp objects, including the blades used in box-cutters, were intentionally placed on the children's playground equipment.

A park maintenance worker found the blades, and then called the sheriff's department immediately, authorities said. No one was hurt.

Sheriff's spokesperson Staci Parks wanted to be clear: The way the blades were placed was no accident.

"They had put the razor blades sticking up in the areas of the slide, so as the child slid down, they would cut themselves very badly, also the fork was placed at the bottom of one of the swing sets," said Parks. "Anybody that would put something that would purposely plant something in a park that would injure children, we really need to find who these suspects are."

People were disturbed by the news.

"That is awful, that is just criminal," said Sharon Slowik. "I grew up in Detroit. A lot of criminal activity with razor blades in Halloween candy. So having this, it's very sad."

Anyone with information is asked to call the San Bernardino Sheriff's Department at (760) 552-6800.