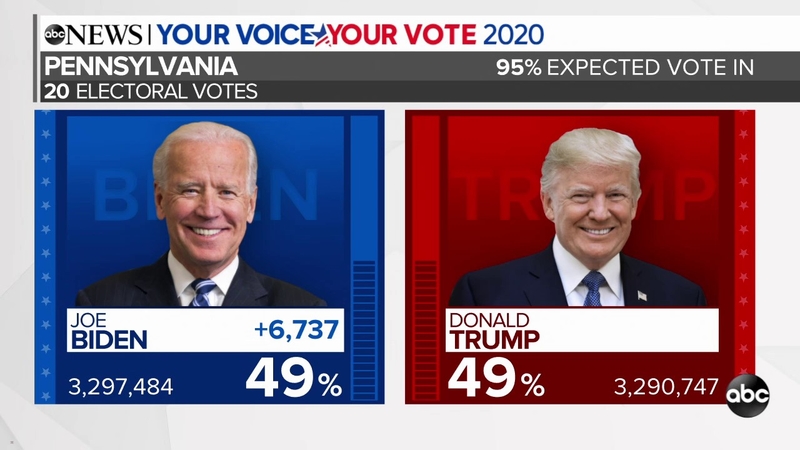 Biden ahead in Georgia, Pennsylvania

WASHINGTON -- Three days after Election Day, the race between President Donald Trump and former Vice President Joe Biden is extremely close in some key battleground states, meaning a campaign could demand or a state could automatically trigger a vote recount.

Trump's campaign has engaged in a flurry of legal activity to try to improve the Republican president's chances, including a recount in Wisconsin. Since the state pays for recounts of races that are within a quarter of a percentage point, and the margin in Wisconsin is larger, the Trump campaign would have to pay for it.

Electoral research conducted by the Associated Press found there have been 31 statewide recounts since 2000. Three of those changed the outcomes of their elections. The initial margins in those races were 137 votes, 215 votes and 261 votes.

Among all 31 recounts, the largest shift in results was 0.1%, in the 2006 race for Vermont's Auditor of Accounts. This was a low turnout election in which the initial results had one candidate winning by 137 votes. The candidate eventually lost by 102 votes, for a swing of 239 votes.

The average shift in the margin between the top two candidates was 0.019%.

Here's a look at recount laws protocols in battleground states that are critical in the 2020 presidential election: