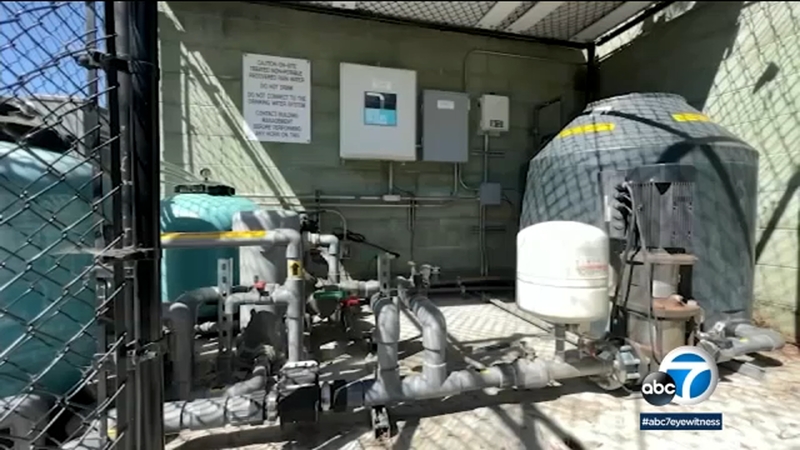 Recycling has become a big part of saving water amid California's historic drought, and businesses across the state are implementing it in interesting ways.

Wasting water is something that has bothered Buzz Boettcher for years.

"I've done a lot of offshore sailing and racing over the years, and it didn't make sense that ten people could live on a boat for 15 days out in the ocean and survive on 200 gallons of water, and you come ashore, and you use 20,000 gallons a month," he said.

That's what gave Boettcher the idea to build a system at the Santa Monica Pico branch library that collects rain water from the roof and converts it into what's called gray water - basically taking water that would probably end up flowing down the gutter and reusing it to flush toilets.

Boettcher said all it takes is nearly two inches of rain to completely fill the tank. That much rainfall is rare in Southern California, so some of the systems he's built over the years actually recycle water.

At first glance, the system at the Eataly marketplace in Century City looks like the tank used at a microbrewery, but it's not.

"We are not making beer, but we are saving water," said Stefano Murialdo.

He said every Eataly store around the world has a theme. In Los Angeles, the store is dedicated to water and its preservation, trying to avoid waste as much as possible.

Their system takes all of the water that goes through the sink drains in the restrooms and reuses it. It's then used to flush toilets and to water the rooftop planters.

To be clear, gray water is not drinking water. Boettcher said he's installed these kinds of systems in people's homes over the years. And that's not all.

"We're doing a system right now in Houston where we are recycling truck wash water," he said.

The systems aren't cheap, but considering that experts say we're in the middle of the worst drought in 1,200 years, Boettcher said: "It doesn't make sense to use nice, clean, potable water to flush toilets. Talk about good water going after bad."