Regina King thanks her mother in emotional Oscars 2019 acceptance speech 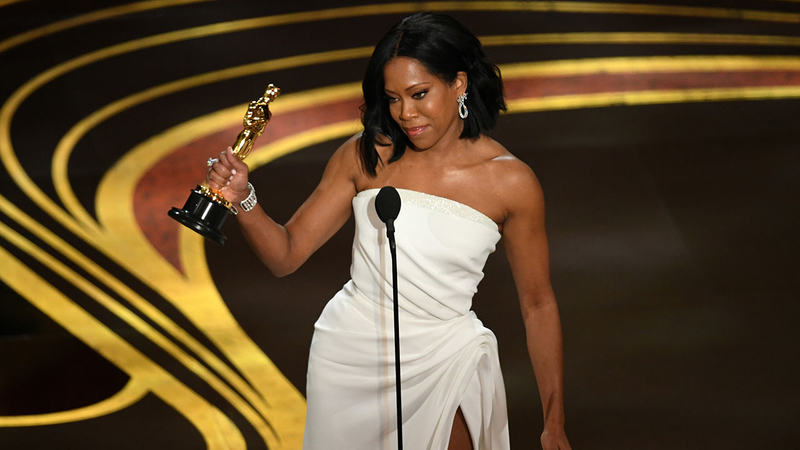 LOS ANGELES -- An emotional Regina King thanked her mother during her Oscars acceptance speech, saying she was "an example of what it looks like when support and love is poured into someone."

"Mom, I love you so much," she said through tears. "Thank you for teaching me that God has always been leaning in my direction."

King won the Oscar for best supporting actress for her role in "If Beale Street Could Talk." It's the first Oscar and first nomination for King, who has won three Emmy Awards for her work on television.

King also thanked author James Baldwin, whose novel is the basis for the film from director Barry Jenkins.

Regina King walks the Oscars Red Carpet ahead of the 91st Academy Awards.

"To be standing here representing one of the greatest artists of all time - James Baldwin. James Baldwin bursts this baby and Barry nurtured her, surrounding her with so much love and support. So it's appropriate to be standing here because I am an example of what it looks like when support and love is poured into someone," King said."God is good, all the time."

The best supporting actress award was presented by Maya Rudolph, Tina Fey and Amy Poehler after they delivered the night's opening monologue.

Earlier in the evening, King brought Old Hollywood alive on the red carpet in a romantic white gown with a touch of sparkle and a long train. She paired her strapless ruched Oscar de la Renta gown with a white gold and diamond bracelet and pear-shaped diamond drop earrings from Chopard.

As she hurried down the red carpet with a companion holding her train, King received a rousing round of applause from the audience members watching from the bleachers erected outside the Dolby Theatre.