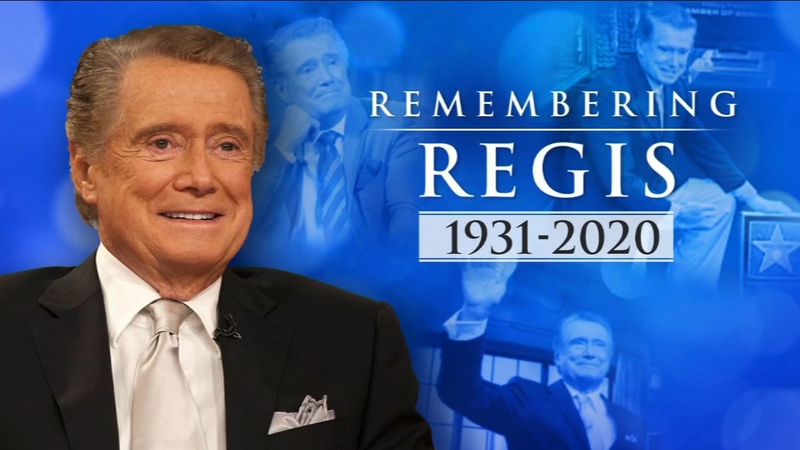 NEW YORK -- Kelly Ripa and Ryan Seacrest remembered Regis Philbin as "the ultimate class act," but also as their dear friend and a member of the family.

"He would talk to them like they were adults and my kids they responded to that in a way that was so they just worshiped him," said Ripa, Philbin's former co-host for a decade. "Regis is one the people who we all believed I think would somehow figure out a way around the inevitable."

Both hosts recalled how generous he was with his advice and guidance.

"And I remember one morning, we had finished our show and we had just started and he came downstairs to the radio studio and he gave me a big hug," Seacrest said. "It was like a seal of approval."
EMBED More News Videos

What started as a local show at WABC-TV, became a national sensation thanks to an everyman from the Bronx.

"He had time for everybody and he made people feel better when they left, and that's kind of how I want to remember him," said Art Moore, VP Programming for WABC-TV.

The longtime executive producer of "Live" Michael Gelman began as a production assistant on the show.

"I'm very sad," Gelman said. "I mean I came to Regis as a kid, and he took a chance on me. And what you were saying, he's such a young energy that i think he believed in my young energy."

On "Good Morning America," one legend was recalled by another.

"He was exactly the same in real life, and that's because he wasn't someone who went on the air and just read a script," said Joan Lunden, a co-host of ABC's Good Morning America from 1980 to 1997. "He was just completely genuine and authentic and himself."

No person has spent more hours on television, racking up more than 17,000 hours -- all the more remarkable when you consider true success didn't come until Philbin was past 50.

"When I came to New York and had this what you would call a last chance, that's when it became important for me to make this thing happen," he said.

And Philbin made watching it happen most memorable for all of us.

The funeral service and burial of Philbin will be held on Notre Dame's campus, according to the South Bend Tribune. He frequently visited the university and continued to enthusiastically support them long after graduating from there in 1953.

The date has not been set.

ABC News also announced Monday a prime time special on Philbin, his life and his legacy as the legendary host of the "Live" morning franchise for 28 years. The special edition of "20/20" features an exclusive interview with Ripa.

The program will also include Philbin's final television interview with Jimmy Kimmel in March 2020, as well as interviews with his co-hosts through the years including Kathie Lee Gifford and Mary Hart, interviews with his childhood friends, a tour of the Bronx where he grew up, an emotional surprise visit with students at his high school and a trip down memory lane with Philbin screening some of his favorite clips of "Live."