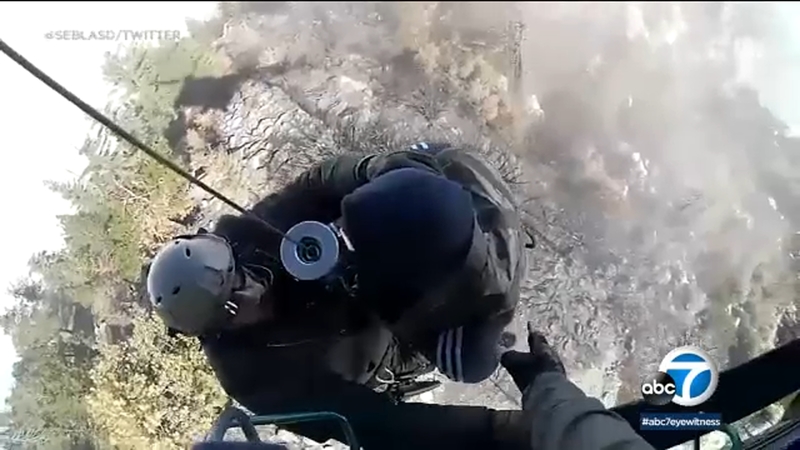 Man rescued after getting lost in Angeles National Forest speaks out

A hiker from Palmdale who got lost in the Angeles National Forest and texted his friend a life-saving photo just as his cellphone was about to die is detailing what that was like before he was rescued.

For more than 30 hours, Rene Compean was alone in the forest wilderness. He set out on a Monday morning hike on a familiar path but soon wandered off the trail through some burn areas.

With night and fog rolling in, his phone suddenly dropped from 30% to less than 5%. He climbed as high as he could to try to get a signal before it died and sent a photo to his roommate, which authorities used to eventually find him.

He didn't know it, but it set off a frantic search. Los Angeles County search and rescue helicopters looked that night and wound up flying right over him.

"I took my tank top off...and I started waving it but then the fog came in and it got so thick that I could not see up to like 10, 15 feet," Compean said. "So they flew right on top of me but they could not see me."

He then spent the night in the wild, cold with no food or water. Compean also managed to see some mountain lions and bears.

"They were on opposite side of the canyon, which is a good thing," he said with relief in his voice.

Compean says it was mostly a sleepless night on the mountain, his mind racing with thoughts of what would happen if he wasn't found.

Though weak and dehydrated, he was able to make it above the clouds on Tuesday where a ham operator, who recognized the terrain in that photo he texted, was able to direct the rescuers.

Compean says he's so thankful that he was found and now has advice for even the most experienced hikers who may find themselves in an unexpected situation like his.

"Don't do what I did. Have extra food, water and stick to the trails always," he said.